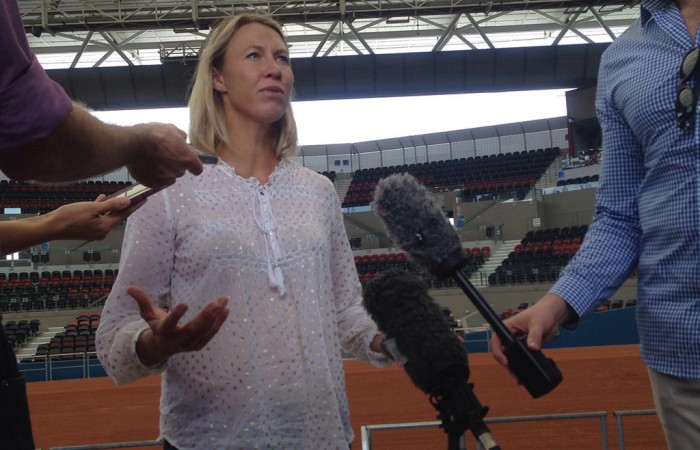 Speaking beside the newly-laid red courts, Molik on Wednesday confirmed the world No.34, who reached the last 16 at this year’s Australian Open, was a certain selection when she names her team this week.

“She sits now as our No.2 singles player behind Sam Stosur so to have Dasha at our disposal is really exciting,” she said.

“She’s come off a great summer and endeared herself to the public.

“The important fact with Daria is she’s proven that she can play with the Australian crowd behind her and she can perform under pressure and beat big players on big stages.”

Gavrilova may need to beat the biggest of all with Serena Williams a possibility of turning out for the US in the tie which will determine who returns to the eight-strong World Group for 2017.

Molik said clay would be the best surface for Australia to pull off an upset, with it particularly playing into the hands of “linchpin” Stosur who starred in a 3-2 victory over Slovakia last month.

Both Stosur and Gavrilova will be coming off the WTA tour stop at Charleston, South Carolina, played on green clay.

“The transition will be seamless and they can hit the ground running,” Molik said. “The surface will suit our entire team.”

Gavrilova was only last Wednesday granted eligibility by the International Tennis Federation after winning an appeal to represent her adopted nation.

Despite having received citizenship, Gavrilova had initially been blocked due to a new ITF rule which requires players to be citizens for at least two years before representing their countries in Davis or Fed Cup.

“It’s been a long process, somewhat drawn out, but patience has really paid off,” Molik said.

“The prospect of her playing in the green and gold for the first time in a Fed Cup situation is something that she’s really looking forward.”

Molik indicated doubles specialist Casey Dellacqua would join Gavrilova and Stosur in the team, while she was still considering her fourth player for the 16-17 April tie.

Australia will take on the United States in the Fed Cup World Group Play-offs on 16-17 April. Get your tickets now!