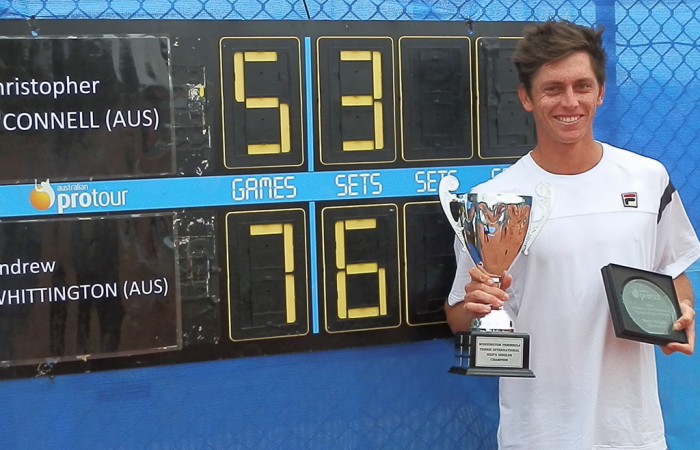 Victorian Andrew Whittington has made it consecutive Pro Tour titles in Mornington after defeating Chris O’Connell in the final of the Mornington Peninsula Tennis International #2 on Sunday.

“The first title was really nice, but in the second week to get the win again, it’s just icing on the cake really,” Whittington said. “It’s pretty tough to go back-to-back but I found a way.”

After taking a tense opening set, the fourth seed found trouble early in the second, immediately dropping his serve and then facing further break points. But after lifting his intensity to draw level, he was never headed, rushing out to secure the 7-5 6-3 victory in 97 minutes.

“I took my chances when I needed to today, especially in the first set. After that, I felt like I got on top. The rallies started to go my way a little more,” he said.

Whittington will look to head to Asia in the immediate future in a bid to continue the momentum he has built on the Australian Pro Tour this year, which netted him a semifinal berth at the ATP Challenger in Happy Valley in January in addition to the dual titles in Mornington.

“I had a really good pre-season,” the 22-year-old said. “I got my body right and my fitness levels up and I feel like that has really stood me in good stead.

“My mental side has also really improved, I’m backing myself and being more positive towards my game. I think that’s shown already by some of my results.”

With the expected boost in his ATP world ranking, Whittington will now likely find himself surpassing his previous career-high of No.368.

“I’m very pleased with the way I’m going at the moment but I’m not stopping there,” he said. “I will try and keep it up and put in a really good year.”