Australian legend Pat Rafter was on hand to unveil plans for a $16.7 million world-class tennis centre at Marrara in Darwin. 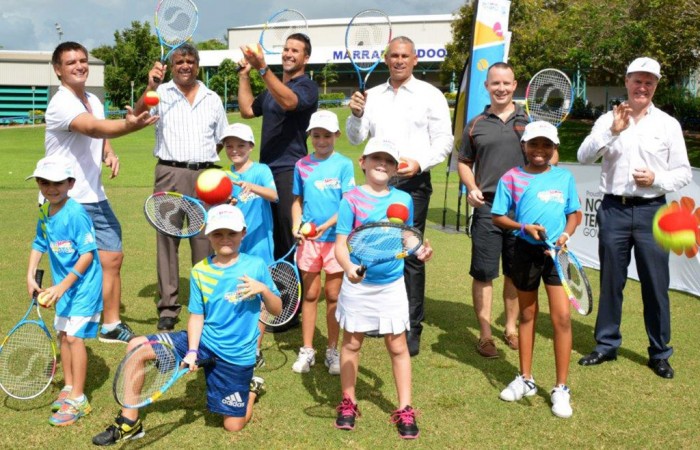 “The new $16.7 million tennis centre will enable the Northern Territory to host more international competitions and make the Top End the envy of the nation,” Giles said.

As part of the agreement to fund the tennis centre, Tennis Australia has committed to schedule a number of national and international events in Darwin like Davis Cup and Fed Cup ties, with further details will be confirmed in time.

“I’m delighted that one of our Australian tennis greats, Pat Rafter was able to join us to launch the centre,” Giles said.

“Building the tennis centre means that we will have the top-class facilities to develop the skills of young Territorian tennis players. Who knows? The Territory may have the next Pat Rafter, Lleyton Hewitt or Samantha Stosur.”

The new tennis centre was allocated $8 million in this year’s Budget, with the aim to find external funding sources for the remaining $8 million required for the centre to proceed.

Mr Giles said the Government had decided to fully fund the centre because its advanced stage of design meant it could proceed to construction very quickly and create jobs for local contractors.

“Our Boosting our Economy package is not only creating new jobs for local businesses but also international standard sporting facilities that will serve generations of Territorians to come,” Giles said.

A US Open champion in 1997 and 1998 and twice a Wimbledon finalist (2000 and 2001), Rafter, currently Director of Performance for Tennis Australia, heaped praise on the NT Government’s commitment to the development of tennis for young Territorians and for ensuing the road to international tennis was set in stone.

“As a kid I could only have dreamed of having somewhere like this to play, and well done to the Northern Territory government for having this vision and making it a reality,” Rafter said.

“A centre like this will give lots of kids the opportunity to learn and develop as players, and most importantly, have fun doing it.

“One of the keys to getting more kids involved in the sport is having great places for them to play. Facilities like this also support the community and encourage families to get involved in tennis.”

The new tennis centre will capitalise on the momentum generated by last year’s Davis Cup quarterfinal tie against Kazakhstan – held at Marrara in July – which attracted more than 12,300 spectators and attracted invaluable exposure for the Northern Territory throughout the world.

Pat Rafter said the tie had been a terrific opportunity to bring elite tennis to the top end.

“The crowds were fantastic, they really supported the players, and Darwin played a major role in the success of the tie,” Rafter said.

“There are a lot of tennis events perfect for Darwin, from Junior Davis and Fed Cup, a new Indigenous championship and even legends events, where the old retired guys like me get out and have a hit. And of course Darwin is ideal as a winter training base for our elite athletes.”

Minister for Sport and Recreation, Nathan Barrett, said the development of the centre marked a historic chapter in Northern Territory sport.

“This state-of-the-art tennis centre will deliver invaluable benefits to the development of tennis in the Northern Territory both in the near future and for generations to come,” Barrett said.

“It will not only ensure young Territorians and coaches are afforded the opportunity to develop their skills in a world class facility, it will also shine the international spotlight on the Northern Territory through international competition and the ongoing benefits of that exposure will have tremendously positive flow-on effects for the entire community.”

Tennis Australia president Steve Healy thanked the Northern Territory Government for their commitment and said the new centre would ensure that Darwin was now in a very viable position to bid for further international competition across all age groups.

CEO of Tennis NT Sam Gibson said the facility has been designed with the capability to host a range of programs and events from grassroots level to international juniors and professional events.

“The development of a major facility in Darwin has been Tennis NT’s major strategic focus for a number of years. As such we’re very thankful for the NT Government’s support in making it a reality,” Gibson said.

“It provides us with the opportunity to develop all facets of the sport across the NT.”