Hewitt reflects on first tie at the helm

Lleyton Hewitt was asked to assess his first tie as captain of the Australian Davis Cup team. Find out what he had to say. 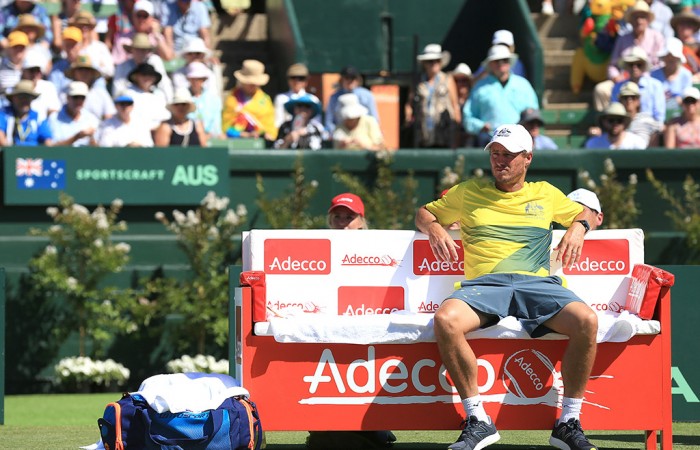 Following the completion of his first tie as captain of the Australian Davis Cup team – a 3-1 loss to the United States – Lleyton Hewitt was experiencing a mix of emotions.

“A lot of positives came out of it,” he said. “But it was obviously pretty tough as well at times with the late changes and trying to work out the best situation to try and give ourselves the best opportunity to at least go to the fifth match as well.”

Nick Kyrgios, Australia’s second-ranked player, was forced to withdraw from the tie due to a virus, forcing Hewitt to select himself among the four-man squad.

Isner then served Tomic off the court in the first of the reverse singles rubbers to cement victory for the visitors.

Yet Hewitt was nonetheless proud of his charges.

“I enjoyed it with the boys. Everyone came, gave absolutely 100 per cent,” he said.

“They did absolutely everything that me and the coaching staff asked of them the whole time and that’s all I can want from these guys; turning up and giving their best for me and trusting in me what I’m telling them as well.”

Australia later in 2015 faces a World Group Play-off tie, a stage of the competition that determines which nations remain in the World Group or are relegated to the zonal tiers.

“It will be (tough) but we’ve got to try and win that,” Hewitt said.

“It’s a long way off now but we’ve obviously got to focus on winning that and we want to stay in the World Group next year.”