Sunday set to sizzle at Kooyong

A warm day and a crackling atmosphere are expected to greet the players as Australia and the United States head into a live final day of play at Kooyong. 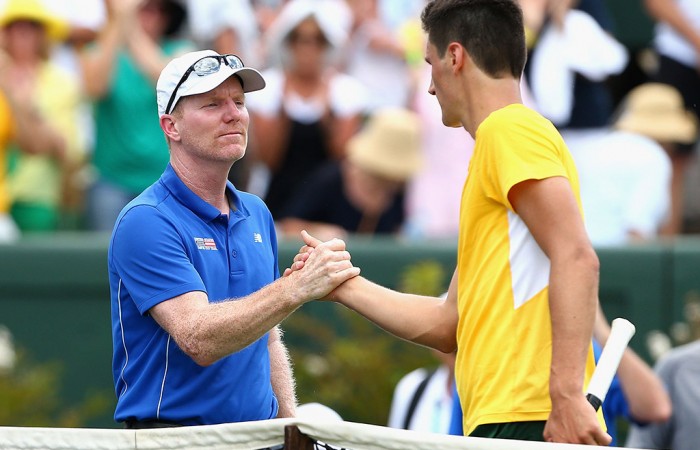 The third and final day of play in the Australia v United States Davis Cup tie at Kooyong is expected to be a thriller.

With scores poised at 2-1 in favour of the visitors, the tie hangs in the balance and will open with a live singles rubber between Bernard Tomic and John Isner, the nations’ respective No.1 players.

With a large crowd expected at Kooyong and the forecast for a sunny 30 degrees Celcius, it promises to be a thrilling day of action.

“We need Bernie to win, so it’s pretty simple at the moment. That’s obviously our main focus,” said Australian captain Lleyton Hewitt, after he and John Peers fell in a five-set doubles epic to Bob and Mike Bryan on Saturday.

“He’s our No.1 player, he’s the leader of the team. He played awfully well yesterday and we’re going to need that out of him again tomorrow.

“He’s going to have to serve well. John’s going to serve well. But Bernie plays a totally different style of game to what Grothy (Sam Groth) gave Isner yesterday. Bernie backs himself over five sets and I think he’ll play well tomorrow.”

United States captain Jim Courier said he was wary of Tomic, after the Queenslander’s impressive four-set win over Jack Sock in the second singles rubber on Friday.

“It’s going to be an exciting day for sure. Bernie played awfully well yesterday and so did John. So that’s where we’ll start,” he said.

“Looks like it’s gonna be a toasty one (weather wise) again so that could play a part in the match – hopefully John, I would think, would be a little fresher than Bernie given he only played three sets, and could be a factor.

Should Tomic win, it would send the tie into a live fifth rubber. Courier said that despite being unsure who Australia would field in that potential event, he said his team would be ready for the challenge.

“At this stage we don’t know necessarily whether it’s going to be Sam or Lleyton playing in that fifth. The way Lleyton played – I would think he would give himself a consideration should there be a live fifth match so we’ll be ready for that eventuality if it comes to pass,” he said.

“This is why we love this competition – it’s Sunday, it’s live, it’s all on the line, and energy levels are going to be extraordinary.”