Bernard Tomic scored his first victory over Jack Sock in three attempts to level Australia's Davis Cup tie against the United States at one rubber apiece. 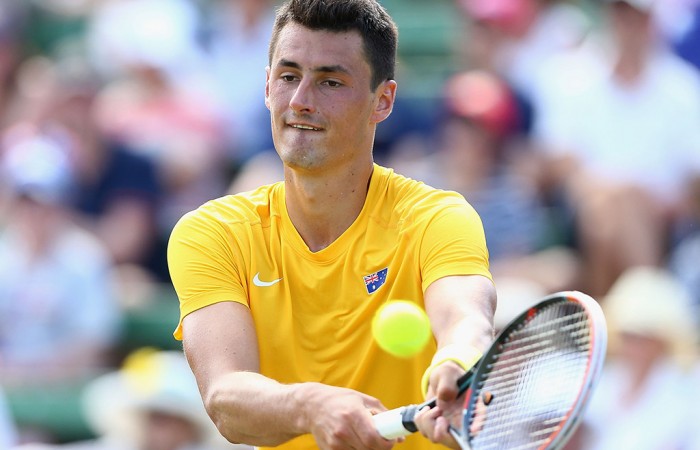 Bernard Tomic had put Australia firmly back in contention in its Davis Cup tie against the United States at Kooyong, overcoming Jack Sock 7-6(2) 6-3 3-6 6-4.

It was Tomic’s first win against the American in three attempts and sees the hosts go into Saturday’s all-important doubles rubber locked with the US at one rubber apiece.

“I knew it was going to be tough (against) anyone you haven’t beaten in your career … but I was playing him on a surface I knew I could beat him on and I was very happy because the conditions were very tough,” Tomic said.

Much had been made of Tomic’s 0-2 head-to-head record against Sock coming into the tie. Less had been made of Sock’s tepid career grasscourt record of 10-8; the American had never even played a professional grasscourt match until 2012, four years into his competitive career.

“(Playing Tomic) on grass is the biggest difference I would say. I’ve played him (previously) on some slow hard courts where my style definitely matches up well against him,” said Sock.

“His favourite surface is grass. His best results at a Slam are on grass. (He’s) very crafty out there and his game is well-suited for it.

“My least experience has been on grass so for me I actually took away some confidence today playing out there against an experienced grass(court) player. I’ll definitely use that for Sunday.”

Bernie #Tomic: “Having Lleyton by my side means a lot to me” #DavisCup #GoAussies #AUSUSA https://t.co/6suxHhEHYc

Tomic played exemplary tennis in the first two sets of the match, serving strongly and keeping Sock off-balance with his patented mix of spins, trajectories and pace.

His level was especially impressive in the first-set tiebreak; with players having been inseparable up until that point, Tomic opened up a 4-1 lead with a sliding ace out wide and extended it to 5-1 with a running forehand winner. A forcing backhand up the line handed him a bundle of set points, which he converted when Sock sent a return long.

It was similar aggression that helped him in the second set. Tomic drew an error thanks to a penetrating off-forehand, building a 15-40 lead in the seventh game. A couple of points later, he came out on top of a searching rally to break for a 4-3 lead.

Yet Tomic appeared to flag physically in the heat during the third set.

From 30-15 in the third game, he began spraying his shots, shanking two balls either side of a forehand error to surrender serve. Increasingly listless and flat-footed, Tomic watched as Sock sent the match into a fourth set.

“It became a little bit hotter, and after playing those first two sets everything got to me,” Tomic said.

“I had to find a bit of that energy; I lapse away with my concentration a lot (but sometimes) that to me is a good thing because it rebuilds your energy, and it worked out in my favour in the fourth set.”

In the ninth game he upped the aggression to force some errors from Sock, scoring an invaluable service break and a 5-4 lead.

With captain Lleyton Hewitt passionately urging his charge on from the sidelines, Tomic served out the match comfortably, securing victory in two hours, 24 minutes.

“For me it was an amazing situation to be a part of today. It was the first time Lleyton was on the chair for me, (with me) playing by his side,” Tomic said.

“It’s something new and something I respect, and it was a great honour, so I was happy to be a part of this match today.”