Captains assess a tie in the balance

Lleyton Hewitt and Jim Courier gave their thoughts on which team has the advantage going forward in the Australia v United States Davis Cup tie. 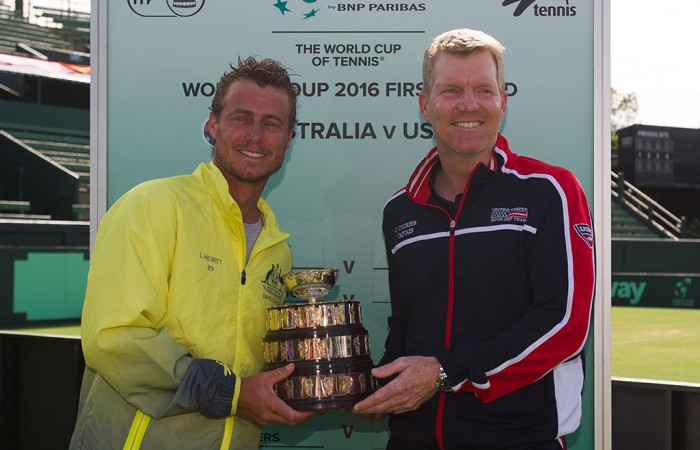 Jack Sock had not long ago lost to Bernard Tomic in the second singles rubber of the Australia v United States Davis Cup tie at Kooyong on Friday.

After the hosts had fallen behind when John Isner beat Sam Groth earlier in the day, Tomic’s victory had levelled the tie at 1-1.

US captain Jim Courier was asked if either team had the advantage.

He paused for a moment.

“Look, Bob and Mike Bryan seem to be an advantage in the historical canon of doubles in Davis Cup,” he answered, “but every day is a different day.

“They (the Bryans) have played awfully well. We feel confident in them. But they’ve lost matches in Davis Cup too – we don’t take anything for granted and we’ll be ready to go.

“But I love having them on our side.”

The Bryans were, at the time of writing, expected to line up against the Aussie pair of Groth and Cup debutant John Peers.

“Obviously both matches today probably went to plan on rankings and on form.

“The Bryans are obviously the favourites tomorrow in the doubles but I still think our guys have got a good shot at it.

“Then on the last day, anything can happen. It’s going to be live going into the last day after today(‘s results), which is nice.”