Lleyton Hewitt has opted for John Peers to partner Sam Groth in the Australia v United States Davis Cup doubles rubber, believing the Victorian has what it takes to tackle the Bryans. 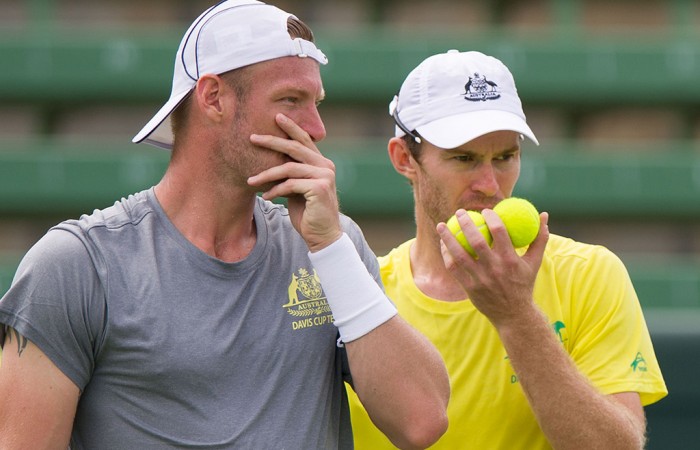 Hewitt, who partnered Groth unsuccessfully against Great Britain in last year’s Davis Cup semifinal, elected to go with doubles specialist Peers instead of asking either of his singles stars, Nick Kyrgios or Bernard Tomic, to take part in the critical doubles match in the first-round tie against the US that gets underway at Kooyong on Friday.

“He’s played the Bryans and he’s beaten the Bryans, which is so important because they have a great aura on the doubles court,” Hewitt said.

“We need guys to go out there believing that they’re capable of beating them and John is one of those guys.

“He believes he can take it to them. He and Grothy had a good hitout in Sydney, getting to know each other and their game style, and I think they mix and match very well together.

“It’s more about just working on their game plan over the last week but I’m confident and comfortable with how they’re hitting the ball.”

Peers, 27, plays with Finnish right-hander Henri Kontinen on the ATP tour but played two matches with Groth at the Apia International Sydney in the lead in to this year’s Australian Open.

That pales in comparison to the experience and success of the Bryan brothers, who have won 16 Grand Slam doubles titles and own an imposing 23-4 Davis Cup win-loss record.

But Peers is undaunted and confident in the strength of the partnership he can form with the big-serving Groth.

“We’ve known each other for years and years, so it’s always good to get on the same side of the net as Sam,” Peers said.

“Knowing each other for so long it’s actually really easy and comfortable to slip straight into it and play some good tennis together.”