Jaimee Fourlis won her first professional title at the weekend, becoming the first Australian 16-year-old to do so on the Pro Tour since Ash Barty in 2012. 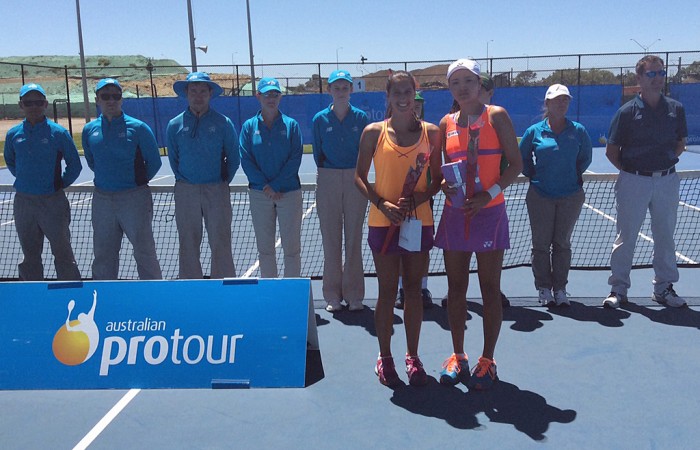 Qualifier Jaimee Fourlis has completed a dream week to claim her first ever professional ITF title.

At 16, Fourlis became the youngest Aussie in four years to win a title on the Australian Pro Tour since Ash Barty did so twice in 2012 (Sydney and Mildura). Notably, Fourlis is 152 days younger than Barty was at the time.

“That’s pretty cool,” Fourlis said upon hearing about her achievement.

Coincidentally, Barty chose the Perth event to make her comeback to tennis this week, and it was the Queenslander who warmed Fourlis up in preparation for the final.

Barty also followed Fourlis onto court to compete in the doubles final with her West Australian partner Jess Moore. The wildcard duo faced unseeded Australians Alison Bai and Abbie Myers and successfully took the title, storming home from a long way back in the match tiebreaker to win a close encounter 3-6 6-4 [10-8].

“It feels pretty amazing to be honest,” Fourlis said. “Coming through quallies it’s been a long week.

“I’m very happy with the way I’ve been playing. I’ve stayed positive, kept the right attitude on the court. Everything off the court has been good as well, like warming up and cooling down.”

In a match lasting 2 hours and 48 minutes, the Victorian teenager looked in trouble down an early break in the final set, but was able to capitalise on a shaky game from Jang as the No.5 seed attempted to serve out the match. After levelling the score on a double fault – the Korean’s only one for the entire match – Fourlis then took full advantage, standing firm to send it into a deciding tiebreaker which she dominated from the outset.

“I didn’t think too much,” she said of the situation. “I just thought ‘keep fighting’”.

The current world No.950 can now expect a significant boost in her ranking; and the win over a quality top 200 player like Jang will give her great confidence heading into the second Perth event next week, where she has received a Special Exemption into the main draw.