Mott breaks through in Launceston

Blake Mott has produced the best tennis of his fledgling career to capture a career-first ATP Challenger title in Launceston. 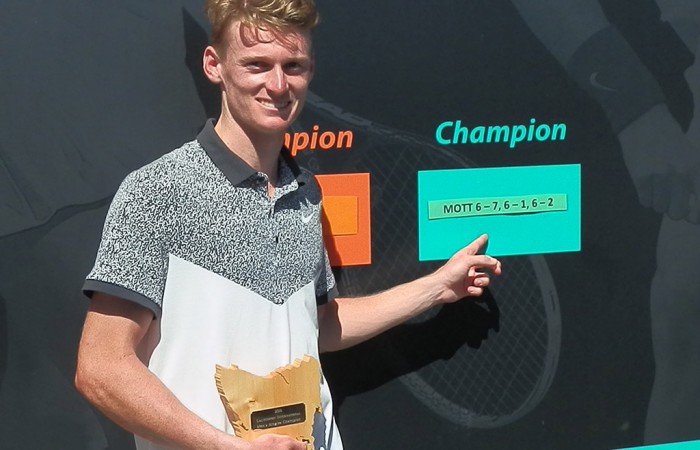 Teenage wildcard Blake Mott has surged past No.8 seed Andrey Golubev at the Neville-Smith Forest Products Launceston International on Sunday to capture his first ever ATP Challenger title.

“I’m still trying to let it all sink in,” Mott said. “It doesn’t feel quite real at the moment.

“For my first title to be on home soil in a place such as Launceston is very special to me. I couldn’t have asked for anywhere else.”

In the biggest match of his fledgling career, the 19-year-old from Wollongong showed poise from the outset and despite being edged in the first set tiebreaker, never lost his determination, lifting his game to oust the former world No.33 from Kazakhstan in two hours and seven minutes.

“I was a bit disappointed after having a few opportunities in the first set. But I knew if I hung in there and competed well that I could go all the way,” Mott said.

“The crowd really lifted me up and I knew that if I just kept fighting I could get there in the end. I sharpened up my serve, got a few more returns into court and got into a different momentum swing.”

Mott began to hit his spots on serve with increased regularity – he served at an impressive 73 per cent for the match – and did not face a single break point in the last set.

As a result of the title, the teenager – whose previous best performance at ATP Challenger level was a quarterfinal in Melbourne, 2013 – will now nearly halve his world ranking, moving up more than 350 places to a career-best position well inside the top 400.

“I try not to look at rankings though,” he said. “If you just focus on the ball coming over the net and competing to the best of your ability, the ranking will take of itself in the long run.”

For now, Mott will return home to Melbourne before continuing to play the rest of the Australian Pro Tour.

“I really want to build on this momentum and take it into the future,” he said. “I think it’s important to just get back out there and continue to do the things you do.”

The doubles final in Launceston was won by unseeded duo Luke Saville and Jordan Thompson, who edged past Dayne Kelly and Matt Reid 6-1 4-6 [13-11] in an all-Australian final.