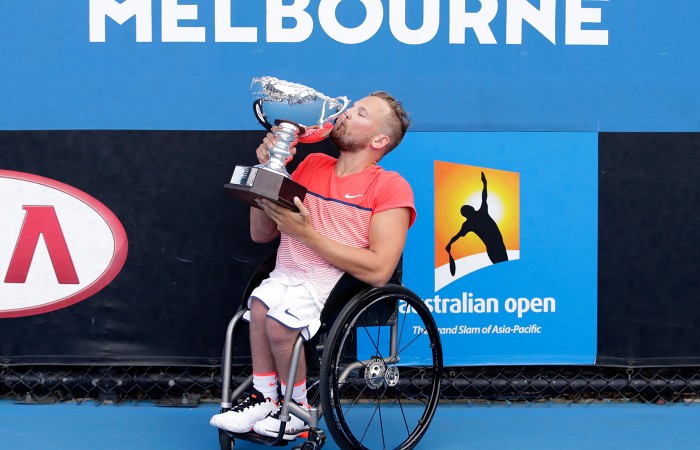 “It feels better,” Alcott said in comparing this title win to last year. “I enjoyed it a lot more.”

“It’s so cool playing in front of thousands of people at your home Grand Slam. It’s just an unbelievable feeling to do everyone proud and win. I am very lucky to do what I do.”

Coming off back-to-back wins in Brisbane and Sydney, the 25-year-old has already begun 2016 in solid form. His previous season will take some topping however, as Alcott finished the year ranked world No.1, with eight titles including two Grand Slams to his name, and was also a finalist in Australia’s prestigious Newcombe Medal – ultimately won by Sam Groth.

In the final, Alcott once again found himself up against his nemesis of recent times: world No.2 Wagner and the man he faced in both his previous Grand Slam finals.

After a win over Wagner in the round-robin stage of the event, Alcott took a great deal of confidence into the match, and while he gave up an early lead to the American, he soon found his level and cruised to a comfortable victory in just 66 minutes

It was a celebration in the end, with Alcott’s adoring crowd cheering him on at every opportunity.

“I was really tight early,” he said. “He started well but then I had two really good games and the pressure went back on him.”

“He missed a few uncharacteristic shots and I just composed myself and swung out.”

Alcott also had plenty of praise for his opponent.

“He’s a king of the sport,” Alcott said. “It just wasn’t his day today. I was really happy to get the job done.”