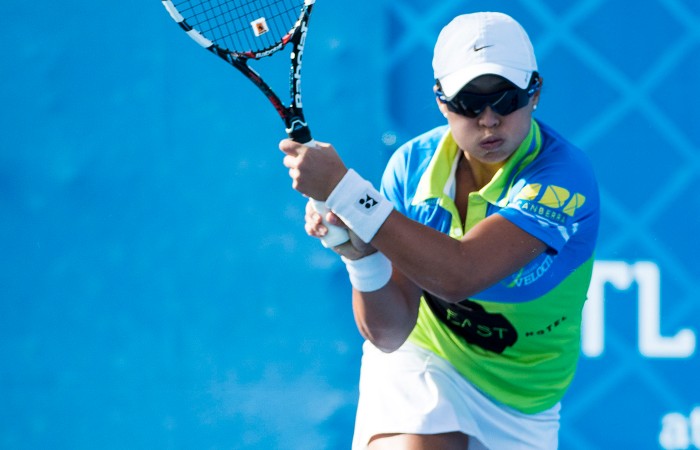 The Canberra Velocity Women’s team have fallen to top seeds Royal South Yarras in the first round of the Asia-Pacific Tennis League (ATL) Playoffs.

Despite taking three of the matches to three sets, Velocity were unable to get on the scoreboard against the Yarras.

Velocity’s top player, Alison Bai took to the court against world number 260 Varatchaya Wongteanchai from Thailand. After breaking early, Bai went out to a 2-0 lead. She then dropped the next four games, to lose the first set 4-2. Meanwhile,at the number 3 spot, the Yarras quickly went out to a 1-0 lead, after Tammi Patterson defeated Ashley Keir 4-1, 4-1.

With Tyra Calderwood taking the first set 4-1 against Karolina Wlodarczak, and Bai fighting back to take the second set 4-2, it looked as though things were starting to swing in Velocity’s favour. After saving four break points at 1-2 in the third Bai held and forced the set into a tiebreak. Wongeanchai, proved too strong taking the tiebreak 5-3, to give the Yarras a 2-0 lead.

Things remained on serve in Calderwood’s match until 2-3 in the second, when Wlodarczak managed to break and clinch the second set 4-2. Wlodarczak quickly went out to a 3-0 lead in the 3rd, with Calderwood saving match points to take it to 3-1. Wlodarczak held serve to close it out and put the Yarras up 3-0.

Alexandra Nancarrow then took to the court against Storm Sanders. Sanders has just come off an appearance at the Australian Open, while it was Nancarrow’s first competitive singles match since September after suffering a hand injury. Sanders dominated the match, dropping just one game to secure the victory for the Yarras.

In the doubles, Bai and Nancarrow teamed up against Sanders and Patterson. The first set was full of service breaks and ended up in a tiebreak, with the Yarras taking it 5-3. The Yarras then closed out the second set 4-1.

Keir and Calderwood faced Masa Jovanovic and Wongteanchai in the other doubles match. The Yarras took the first set 4-2, before Velocity responded to take the second by the same score. After going up 2-0 in the tiebreak, Velocity dropped five of the next six points to lose the match.

Canberra Velocity will return to action tomorrow at 2pm against the Prospect Flames as they play for 5th position.

The ATL Playoffs bring together eight Men’s and eight Women’s teams from the Asia-Pacific region. The matches will take place on the western courts at Melbourne Park

Live scoring for the ATL Playoffs is available here.