Daria Gavrilova's dream run at the Australian Open came to an end at the hands of Carla Suarez Navarro. 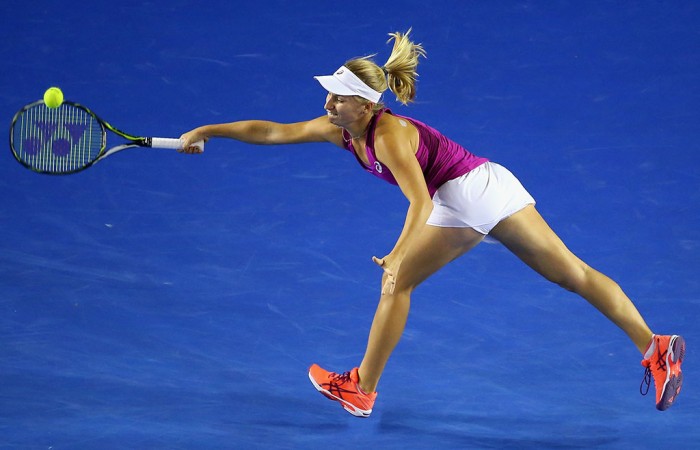 Gavrilova looked set to become the first home hope to reach the women’s quarter-finals in seven years after dishing out a bagel in the opening set before eventually succumbing to a 0-6 6-3 6-2 defeat on Sunday night.

Not since Jelena Dokic in 2009 has an Australian woman made the quarter-finals at Melbourne Park, but Gavrilova surged to within a set of matching the feat after delivering a tactical masterclass early on at Rod Laver Arena.

Alas, the 21-year-old was unable to add to her growing list of prized scalps, going down in two hours and three minutes to leave Bernard Tomic as the last Australian remaining in the 2016 singles draws.

Gavrilova had coming out swinging early on, breaking the Spaniard’s opening service game in a dream start to her nerve-racking centre-court debut.

Taking comparisons with Lleyton Hewitt in her stride, the high-energy, high-strutting fan favourite produced a Hewitt-like backhand topspin lob to consolidate for 3-0 before breaking Suarez Navarro again, this time to love.

Gavrilova also showed Hewitt’s grit to hold from love-40 down, moonballing the 10th seed and ghosting into the net to save one break point, then firing an ace down the middle on another in sweeping to a 5-0 lead.

She lured Suarez Navarro to the net then volley-lobbed the Spaniard in claiming a third break and taking the first set in 25 minutes.

Gavrilova had two break points for a 2-0 buffer in the second set, the let-off proving the turning point in the topsy-turvy match.