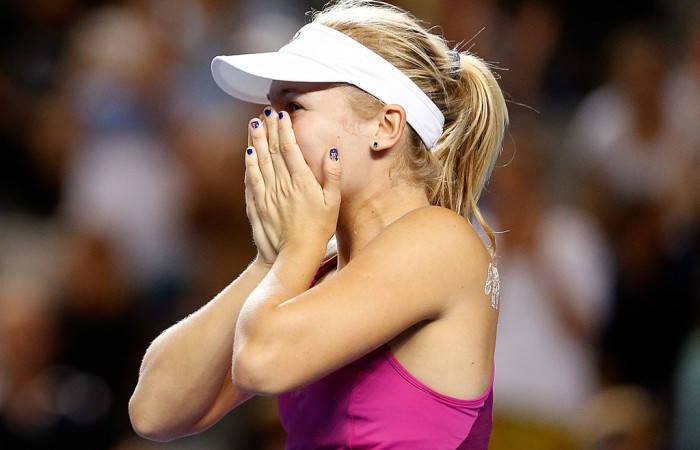 Fist-pumping fan-favourite Daria Gavrilova has continued her dream summer to bound into the Australian Open fourth round at Melbourne Park.

The 21-year-old ball of energy upended seeded Frenchwoman Kristina Mladenovic 6-4 4-6 11-9 in a Friday night thriller to reach the second week of a grand slam for the first time.

Gavrilova backed up her stunning second-round win over dual Wimbledon champion Petra Kvitova to take out Mladenovic, the tournament’s 28th seed, in a rollercoaster encounter at Hisense Arena that featured no less than 13 service breaks.

The bubbly youngster was unable to contain her excitement after wowing fans at the so-called people’s court for almost three hours.

“I’ve got nothing in my head. I’m just really excited and I want to hug the whole stadium,” Gavrilova beamed.

Australia’s Hopman Cup winner led by a set and a break before rebounding from a mid-match meltdown to advance to the last 16 in two hours and 51 tense minutes.

The watershed win not only guaranteed Gavrilova a $200,000 pay day – the biggest cheque of her fledging career – and the possibility of more, but also a fresh career-high ranking inside the world’s top 30.

Such lofty status would give the Melbourne-based former US Open junior champion a grand slam seeding for the first time come the French Open in May.

But first things first – and that’s a crack at Suarez Navarro or Kulichkova for a coveted quarter-final spot in front of her adoring home fans.

After smashing her racquet into the court after dropping the second set to allow Mladenovic back on level terms, Gavrilova regained the ascendancy in the third set to serve for the match at 5-4.

“I just rushed and I really wanted it way too much,” she said after blowing her big chance and then having to wait another 10 games for the chance to close it out.

“I tried too hard. Obviously serving for it the second time, I wanted it just as much.”