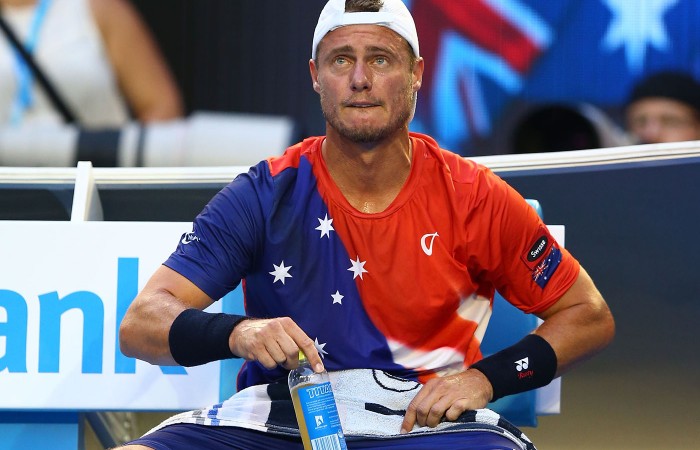 Not ready to bow out just yet, Lleyton Hewitt is eyeing a triumphant encore to his stirring first-round win at the Australian Open.

Tennis fans will once again be glued to their TV screens on Thursday night when Hewitt takes on dogged Spanish baseliner David Ferrer for a place in the third round at Melbourne Park.

Australia’s sentimental favourite is promising to dig in for the long haul against an eighth-seeded opponent he describes as “a brick wall out there”.

“He competes as well as anyone on tour,” Hewitt said as he savoured an emotion-charged 7-6 (7-5) 6-2 6-4 victory over friend and countryman James Duckworth.

“He moves great. Everyone thinks he just makes balls but he’s a pretty aggressive baseliner out there. He doesn’t get back too far behind the court.

“He’s been just under winning that grand slam as well, making the final at the French.

“He’s made so many semi-finals of slams. Especially on clay and hard court, he’s a tough customer for nearly anyone.”

All three of Hewitt’s meetings with the world No.8 have come at slams and all three have been tight, with the Spaniard taking the last two, in four sets at the 2012 US Open, and in a five-set classic at Roland Garros in 2008.

Hewitt won the pair’s first encounter at Wimbledon a decade ago and gives himself a “fighting chance” of pulling off a centre-court boilover at Rod Laver Arena.

“It’s going to be tough, I know that,” Hewitt said.

“But I feel like I’m hitting the ball well enough to go out there and give him a good run.”

Asked what more he wanted out of his Open swansong, Hewitt, as competitive as ever, said: “I want six more”.

“But I just take it one match at a time.

“I do all the right things. I’ve prided myself my whole career on preparing as well as possible and doing all the one percenters to try and get the best result possible.

A victory over Ferrer would leave Hewitt battling either American 31st seed Steve Johnson or Brazilian Thomaz Bellucci on Saturday for a spot in the last 16 at his home slam for the seventh time.