Claiming his first title at age 16 and becoming the ATP’s youngest-ever world No.1 in the years afterwards, Lleyton Hewitt’s champion spirit has been unwavering throughout his enduring career. 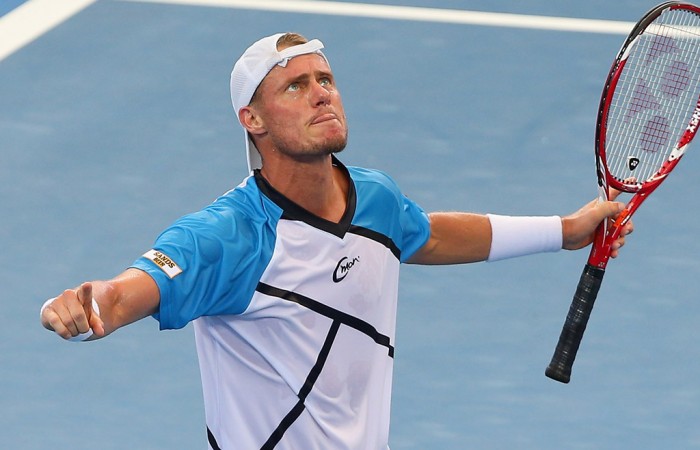 When Andre Agassi encountered the 16-year-old Lleyton Hewitt on Adelaide’s hard courts in January 1998, there was little reason for the recent world No.1 and multi-major champion to feel intimidated.

“I remember that he was wearing safety pins in his shorts to hold them up,” Agassi laughingly recounted of the then teenager many years later. “I’m not kidding. I actually think it was one on each side. I didn’t believe it.”

For Hewitt, the opposite was true. Growing up with a poster of the American decorating his bedroom in suburban Adelaide, Agassi was an early inspiration to the then world No.550. And if competing against a childhood hero wasn’t intimidating enough, the stands of Memorial Drive packed with excited fans must have been.

Hewitt, of course, famously went on to win that match, stunning Agassi in two tiebreak sets. “He was just very young and he went out there and ended up playing a great match,” said Agassi of Hewitt, who memorably defeated countryman Jason Stoltenberg to become only the second-youngest champion in ATP history the following day.

“I was just hoping to win a round,” said Hewitt. “To go on and win it is a great thing.”

If Hewitt and his growing band of supporters were surprised by the impressive breakthrough, they shouldn’t have been. Already the youngest qualifier in Australian Open history – the 15-year-old losing to Sergei Bruguera in 1997’s first round – there was already an against-the-odds quality that set the teenager apart.

Exceeding expectations – even the lofty ones that he set for himself – quickly became a Hewitt trademark. In 1999, Hewitt added to his title count as a 17-year-old at Delray Beach. Four titles (including Adelaide and Sydney) followed in 2000, before his breakthrough year in 2001, where the Australian claimed the first of two Grand Slam titles at the US Open.

Within that history-making victory were five-set wins over home favourites James Blake and Andy Roddick, showcasing the passion that would shape the young Australian’s career. “I feel like when it’s necessary for me to get myself pumped up and play my best tennis, you know, that’s when it comes out,” said Hewitt, who’d unleashed his biggest ‘C’mon’ of the tournament after securing the first set tiebreak in his 7-6(4) 6-1 6-1 win over Pete Sampras in the final.

“I felt that was a big occasion. I needed to get myself pumped up. I needed to sort of get my supporters behind me at that point.”

Many noted the young champion’s ability to withstand pressures against far more experienced opponents. “It’s something that I’ve had to deal with growing up in the juniors back home in Adelaide when I was playing against older guys,” said Hewitt.

“I was No.1 in Australia a couple years out of my age. Everyone was out to beat you back then. I had to deal with those pressures and I had to be very mentally tough. I’ve been able to take that. I’ve got stronger (mentally) as I’ve got older.”

Passion, single-minded focus and a remarkable maturity would continue to combine in the most glorious ways. With an eventual six titles in 2001, including the prestigious Tennis Masters Cup in Sydney, Hewitt was crowned as the youngest-ever world No.1 in 2001 – a record that still stands today. “To do it at the age of 20 and to do it in Australia is a dream. It’s an unbelievable feeling,” said Hewitt.

There was more to come, the Australian becoming one of the few baseliners to claim Wimbledon victory in 2002. Still just 21, Hewitt was already being asked which of his tennis milestones was the most special. “I don’t want to go out there and rate them,” he said of a virtually impossible task. “Every one is very unique – the US Open, getting (to world). No.1 and winning Wimbledon. They’ve all got special things about them and things that make the tournaments special.”

Most special of all – if not the man himself, then certainly for his many fans – was Hewitt’s prolific and unmatched contribution in Davis Cup. In 41 ties spanning 17 years he amassed a 58-20 win-loss record, including a 42-14 record in singles. The South Australian has played the most ties over the most years of any Australian man, and holds the national records for most total wins and most singles wins.

Beyond the staggering numbers was an unrivalled spirit, Hewitt boasting many famous five-set victories in his bulging resume. One of them was in 2003, when Hewitt recovered from a two sets and 2-5 deficit to defeat Roger Federer in the semifinal against Switzerland at Melbourne Park. There was a similarly spirited win as Hewitt defeated Juan Carlos Ferrero in five sets in the final, helping guide Australia to its 28th title.

“Davis Cup means a lot,” Hewitt commented when he was recently asked to describe the most special moments of his career. “Winning, especially in 2003 when I played so well in the semis and the final. You know, doing it in a team atmosphere in Australia was pretty special.”

Such spirit also helped Hewitt overcome physical challenges that would have felled most players, the Aussie enduring multiple surgeries on both hips, knees and a big toe that’s now virtually held together by metal. Even so, he went on to add more impressive achievements late in his career, defeating Roger Federer to win Brisbane in 2014 and claim a milestone 600th match win later that season.

Hewitt closed out his champion career by lining up for a 20th Australian Open this summer, and will next turn his attention to a recently-announced Davis Cup captaincy.

It will be 18 years since he memorably claimed his first title as a 16-year-old. Known then for his remarkable maturity, it’s only fitting that his career would become one of such impressive endurance.

Timeline of a champion

JANUARY 1997
Is the youngest-ever Australian Open qualifier, losing to Sergei Bruguera in the first round of the main draw.

JULY 1999
Debuts in Davis Cup, the then world No.31 stunning world No.10 Todd Martin in his first live singles rubber.

DECEMBER 1999
Is a member of the Australian team that defeats France 3-2 to win its 27th Davis Cup title in Nice, France.

JANUARY 2000
Adds to the eventual eight titles he’ll claim on home soil, with victories in Adelaide and Sydney.

SEPTEMBER 2000
Teams with Belarusian Max Mirnyi to win his first Grand Slam title, in doubles, at the US Open.

SEPTEMBER 2001
After five-set wins over James Blake and Andy Roddick, defeats Pete Sampras in the final to win first Grand Slam title at US Open.

NOVEMBER 2001
A winner of six 2001 titles, including the season-ending Tennis Masters Cup, becomes the youngest man in history to rise to world No.1 at age 20 – a record that still stands.

JULY 2002
Defeats David Nalbandian in the final to become the first Australian to claim a Wimbledon singles title since Pat Cash in 1987.

DECEMBER 2002
Is year-end world No.1 for a second consecutive year, helped by a tour-high five titles, including the season-ending Masters Cup.

DECEMBER 2004
Finishes the season at world No.3 with four ATP titles, including the 20th of his career in Sydney.

JANUARY 2005
Finalist at Australian Open 2005 – the first Australian man to progress so far since Pat Cash in 1988.

JUNE 2006
Defeats Tim Henman, Rafael Nadal and James Blake in the final to claim his 25th career title at Queen’s.

MARCH 2007
Claims his lone title of the season in Las Vegas with wins over Feliciano Lopez, Marat Safin and Jurgen Melzer.

AUGUST 2008
Undergoes surgery on his left hip and ends his season early. It marks Hewitt’s first year since 1997 without a singles title.

MAY 2009
Joins Roger Federer and Carlos Moya as the only active player with 500 career wins when he defeat Philipp Petzschner in the first round of Munich.

JANUARY 2010
Is reportedly urged to retire by medical professionals after undergoing surgery on his right hip.

FEBRUARY 2012
Undergoes radical surgery – in which screws and a metal plate are inserted into his big toe – in order to prolong his career.

JANUARY 2014
Defeats Roger Federer in the final to claim his 29th career title in Brisbane.

MARCH 2014
Defeats Robin Haase in the first round of Miami to become only the third man on ATP Tour with 600 match wins.

AUGUST 2014
Wins Newport to join Federer, Nadal, Djokovic and Murray as one of only five active players to reach 30 ATP titles.

JUNE 2015
Plays the last of 17 Wimbledon campaigns, losing to Finn Jarkko Nieminen 9-7 in the fifth set.

SEPTEMBER 2015
Contests his 65th Grand Slam event at the US Open, losing in five sets to countryman Bernard Tomic in the second round.

OCTOBER 2015
Announced as the seventh captain of the Australian Davis Cup team – at age 34, he’s the youngest Australian to be awarded the honour since John Bromwich in 1949.