Risk pays off for Tomic

Bernard Tomic has powered into the Apia International Sydney quarterfinals. 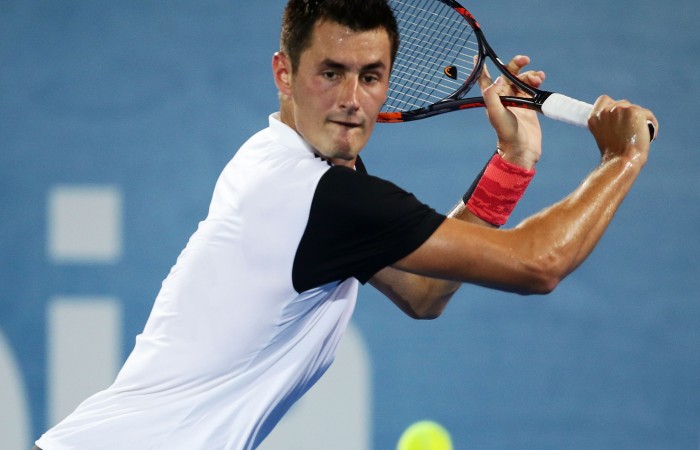 Bernard Tomic admits it’s risky business playing tournament tennis the week before the Australian Open, but a gamble worth taking if it means landing some silverware.

Tomic powered into the Apia International Sydney quarterfinals for the fourth straight year with a win over wildcard Jordan Thompson in their all-Australian affair on Wednesday night.

The 2013 champion and 2014 runner-up said while many of the game’s biggest stars were wise to save themselves for Grand Slam action, his ideal Open lead-up would be backing up his semifinal run in Brisbane with a second title in Sydney.

“I have to play as much tennis as I can. Every tournament for me I look at now trying to win. Here is a chance also to maybe win.

“Maybe it’s not the smartest idea playing before the Grand Slam, especially with my (No.16) seeding now.

“I think if I won this tournament, I would only go up a spot … but you have to play the bigger tournaments now.

“You have to perform well in the Grand Slams, the Masters, to move up close to the top 10. It just shows, I think.

“It’s my favourite tournament. It’s where it all started for me, my first title. I have great memories here.”

Tomic needed just 48 minutes to see off Thompson and set up a date on Thursday night with Russian Teymuraz Gabashvili on Thursday for a place in the semifinals.

“The problem is me and Gabashvili have practiced so many times together. The match can be different,” Tomic said.

“I prefer playing someone that’s new because they don’t know what I’m going to do and how I’m going to play. It’s an advantage, but it can be also difficult for me.

“Gabashvili is very, very talented. He comes out with every match nothing to lose and plays aggressive.

“He’s beaten top players in the past I’ve watched, so I have to be ready.”