Over 12,200 people packed Allphones Arena in Sydney on Monday night as Australia took on The World in Fast4 Tennis. 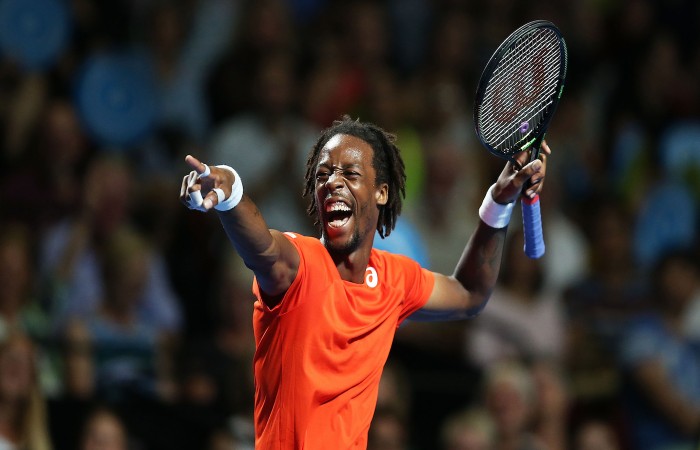 Monday night inside Allphones Arena in Sydney, Nick Kyrgios and Gael Monfils reached over that net for a playful high-five. They had just played a cheeky exchange in the short court, which ended with the Frenchman missing a spin-laden ball to complete it.

This is FAST4 Tennis, the quick-hitting, fast-moving new format that makes the sport more accessible (and time-friendly) to recreational players around Australia. And Monday night it was the driving force behind a friendly (yet competitive) battle among Kyrgios, Monfils, Lleyton Hewitt and the one and only Rafael Nadal.

“It’s great for the crowd; it’s a lot of action-packed, high-energy tennis,” said Hewitt, the 34-year-old who will play his final Australian Open in Melbourne beginning next week. “Every point is important. You get off to a bad start and the set is nearly over. You have to be ready to go right from the start.”

From the start it was electric on Monday, the second year of what has become an annual event for Sydney tennis lovers in conjunction with the Australian Open Series and the Apia International Sydney, happening this week at the Sydney Olympic Park.

Over 12,200 packed the arena in Homebush for FAST4, with the players announced in rockstar format, emerging in a tunnel from behind a curtain, a path of smoke machines leading them onto court. In FAST4, no lets are played, games are to four points with deuce being a “deciding” or “final” point, and sets are to four games, tiebreaks played at 3-all and to five points.

“There is a lot of important points. You cannot relax for one moment,” said Nadal, who played the format at Australian Open Kids Day a year ago. “That makes the crowd more involved, which makes it more special. For an event that makes the tennis go fast and the crowd enjoy more… It’s a good show. That’s the most important thing.”

It was a good show. The format set “The World” (Monfils and Nadal captained by Mats Wilander) vs. Australia (Kyrgios and Hewitt with captain Pat Cash) in four matches overall. The winner? Supposedly The World, which won three out of the four matches. The actual winner? Tennis, and the fans who watched in Sydney and around the country on Channel 7.

“The FAST4 format is exciting, especially for the crowd,” Hewitt added. “We want to get the next Australians wanting to play our sport. We want them to come and see the great stars of the game. It’s a big thing for our sport.”

It was hard to tell who the crowd favourite was. Nadal is no doubt the most successful of the crew, but Hewitt’s Australian farewell has made him a legend playing in the present, and an adoring public appreciating the chance to watch.

Monfils and Kyrgios were up to their shot-making, entertaining best. Rarely did a point end without a flashy winner or go-for-broke attempt. A few times Monfils tried behind-the-back shots; they both hit successful tweeners.

“This format is great,” a smiling Monfils said.

The night concluded with a lap of honour for Hewitt, which thanked the Sydney crowd for its support, recalling sealing the No.1 ranking in that very arena at the ATP World Tour Finals in 2001.

“I’m just trying to enjoy it as much as possible,” Hewitt said of his summer of good-byes.

And perhaps somewhere across Australia the next Lleyton Hewitt was watching Fast4 Monday night, then heading out to the court to try it himself.