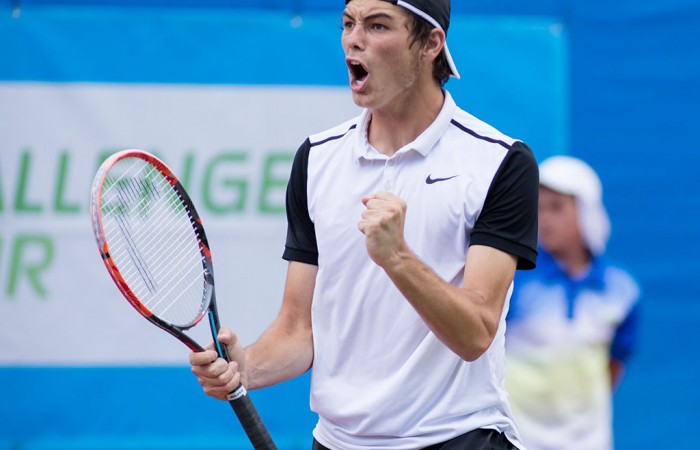 Eighth seed Taylor Fritz has started the New Year where he ended the last, adding a third ATP Challenger title to his fast-growing career total after dispatching top seed Dudi Sela 7-6(7) 6-2 to win the City of Onkaparinga ATP Challenger 2016 on Sunday.

“It feels really good,” Fritz said of the title win. “I’m just really glad to keep the momentum going from where I left off at the end of last season.”

The 18-year-old American has enjoyed a meteoric rise of late, with this victory –his second over the Israeli – likely to push him to within a few places of the world’s top 150, moving nearly 700 places since winning the US Open juniors in September last year.

“This match was a lot tougher,” Fritz said in reference to his victory over Sela in qualifying at Indian Wells last year. “If he were to play like that last time against me, I couldn’t have beaten him, but with the improvements I’ve made, I was able to handle him.”

As for the Happy Valley final, there wasn’t much separating the two players in the opening set, which advanced to a tiebreaker after just a single break point was offered each way.

Fritz then took the early momentum with two sublime backhands giving him some early breathing space. But Sela was in no mood to relinquish the opportunity for an historic 20th career ATP Challenger title and fought back hard to eventually earn himself a set point.

The young Californian was up to the task though and quickly snuffed that out with a timely ace before going on to snatch the first set with yet another thunderbolt.

“Playing the big points better than my opponent. I think that’s something I’m good at, and something I can continue to do through my career,” he said of the way he closed out the opener.

The teenager is continuing to prove himself a formidable frontrunner and he went on to take full advantage of the situation, sending down seven more aces and twice breaking the Sela serve to take the title in just over 78 minutes.

With more physicality on court, a seemingly increased ability to defend and a noticeably improved backhand, Fritz already looks stronger and more matured in 2016 and an imminent assault on the world’s top 100 and beyond seems assured.

“Being stronger on my backhand really helps everything else improve,” he said.

Fritz now moves on to qualifying at Australian Open 2016 where he hopes to make his maiden main draw Grand Slam appearance.

“My first main draw would be great,” he said. “I’m going in with a lot of confidence. Hopefully I can keep it going.”