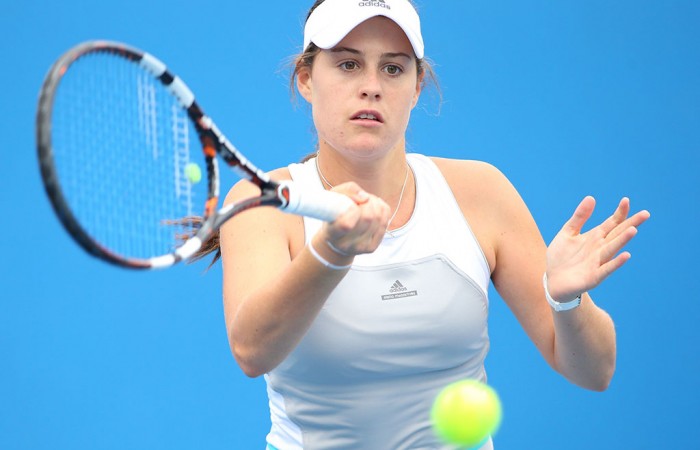 Australian Kimberly Birrell (Qld) will make her WTA Tour main draw debut at the 2016 Hobart International. The 17-year-old world No.368 was announced as a wildcard into the tournament this afternoon.

“I am really, really excited and grateful to be given this opportunity and I can’t wait to play,” she said.

Birrell won her first WTA Tour level match in qualifying at this week’s Brisbane International, upsetting China’s world No.158 Xinyun Han in the first round.

“It was probably the biggest win of my career, so I’m definitely taking a bit of confidence from that,” she said.

American world No.142 Samantha Crawford, who has since reached the semifinals of the main draw, proved too strong in the second round but Birrell plans to use that experience to help her Hobart International campaign.

The Queenslander is no stranger to the Domain Tennis Centre, having competed in qualifying in the past two years. She joins recently announced wildcard recipients Jarmila Wolfe (nee Gajdosova) (Vic) and Maddison Inglis (WA).

Bains has a good record in Hobart, where she reached the final round of qualifying as a 16-year-old wildcard in 2014. Her run included a career-first victory over a top 100 ranked player before she was stopped by eventual champion and now world No.3 Garbine Muguruza.

“I took a lot from that match and learnt a few things,” Bains reflected.

The 18-year-old Queenslander, currently ranked No.609, will contest qualifying for a third consecutive year.

“I’m looking forward to this year and can’t wait to be on court tomorrow,” she said.

Aiava will make her WTA Tour level debut in the qualifying draw. The highly-touted 15-year-old has represented Australia in Junior Fed Cup in the past two years.

“I’m looking forward to it and going in confidently and just trying to do my best,” Aiava said.

Fellow Victorian Zoe Hives is also making her Hobart International debut in the qualifying draw. The 19-year-old is ranked No.504.

“It’s a great experience to get to play against these sorts of players and learn what you have to do to make that level and go higher,” she said.

The qualifying draw will be released later today.