The Australia Gold team of Lleyton Hewitt and Jarmila Wolfe fell to Czechs Jiri Vesely and Karolina Pliskova on Sunday night at the Hopman Cup. 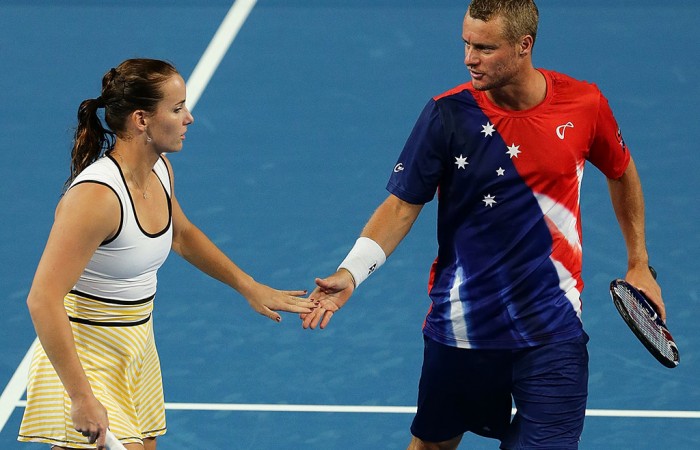 Australia’s experienced Hopman Cup team couldn’t replicate their younger compatriots from earlier in the day with Lleyton Hewitt and Jarmila Wolfe both losing to their Czech Republic opponents at the Perth Arena.

But the Gold team went down in the evening with Hewitt and Wolfe (formerly Gajdosova) losing their singles matches to Jiri Vesely and Karolina Pliskova.

The night began with Hewitt’s first match on his farewell summer.

He lost the opening opening set but showed his trademark fight to win the second set in a tie-break only to lose the decider to his 22-year-old world No. 41 opponent 6-4.

Given it was his first singles match since losing in the second round at the US Open to Bernard Tomic in five sets, Hewitt was happy to get the tough three-setter under his belt.

“I got better as the match went on,” Hewitt said.

“I hadn’t played a competitive singles match since the US Open so it was a really good hit out for me.

“I thought the standard was pretty good, especially in the second and third sets, and he’s a quality player with a big game. I think I’ll be better for the run.”

Wolfe then needed to beat world No. 11 Karolina Pliskova, but went down in straight sets.

Pliskova broke in the 12th game of the first set to take it out but the Australian raced to a 3-1 lead in the second.

Hewitt and Wolfe then lost 6-2 7-5 to Vesely and Pliskova in the mixed doubles rubber.