Queensland teen Oliver Anderson has scored the biggest result of his young career, upsetting Tim Smyczek on Sunday to qualify for the Brisbane International main draw. 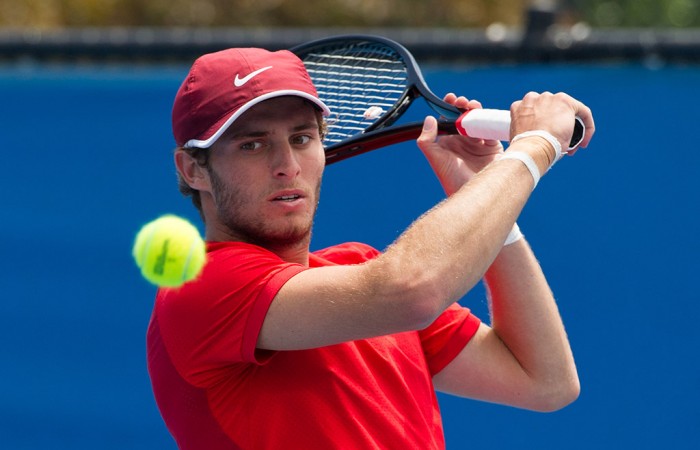 Smyczek is best known for an act of good sportsmanship at last year’s Australian Open, when he won a swag of admirers for allowing Rafael Nadal to replay a serve when a spectator yelled out during his ball toss.

The win could see Anderson face off against fellow Australian Ben Mitchell, Frenchman Lucas Pouille or another qualifier in the first round at the Brisbane International.

Anderson had some raucous support behind him on Show Court 2 at the Queensland Tennis Centre with friends and family on hand to cheer on the biggest win of his career so far – the best crowd he said he’s ever played in front of.

But Anderson said he’ll have no trouble coming off the high when he returns to action on Monday.

“I’ve already started thinking about it. I’m pretty focused on what I need to do tomorrow,” said Anderson, who was used as a fill-in player at the 2014 Hopman Cup where he paired with Italian star Flavia Pennetta for an exhibition mixed doubles match.

Not that he was expecting to do much in his hometown tournament, admitting he was “scared” in the lead-up to qualifiers.

“Enjoy it while it lasts,” Anderson said when asked what his mindset was like in preparation.

“I didn’t have my hopes up too high. I’m surprised with how I went.”

But he said he could already feel the improvement in his game after a change of coach just two weeks ago, from Mark Draper to former Davis Cup player Wayne Arthurs, who has moved to Brisbane.

“We’ve been doing well together so far. He’s helped a lot with my serve … because he had a pretty good one,” Anderson said.

When you qualify for a 1st @ATPWorldTour main draw, you take selfies with new-found fans. Congrats, Oliver Anderson! pic.twitter.com/H2IvqQNn6f

Oliver Anderson under the bright lights of the press room for the 1st time after making #BrisbaneTennis main draw pic.twitter.com/mNBy2B4TZ2

Oliver Anderson: "I'm working with Wayne Arthurs now. He had a pretty good serve, so hopefully it'll help mine." #BrisbaneTennis