Storm Sanders outlasted Abbie Myers in a torrid three-set affair to advance to the semifinals of the Australian Open 2016 Play-off. 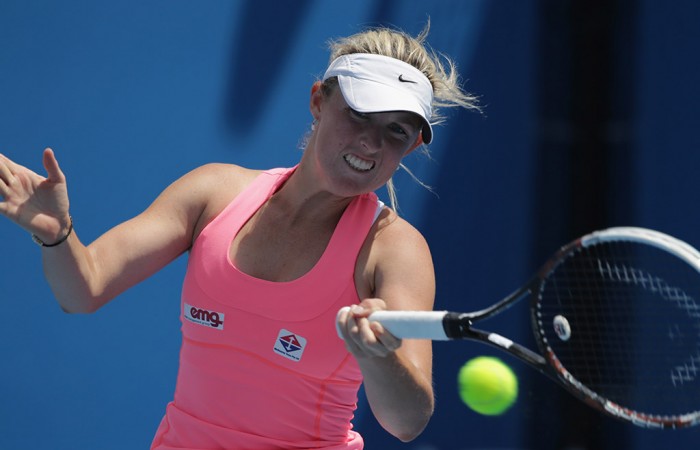 Sanders clinched a semifinal spot thanks to a 4-6 6-2 7-6(6) defeat of Myers, setting up a clash with No.2 seed Arina Rodionova.

Earlier on Thursday, Rodionova eliminated 15-year-old Destanee Aiava 6-2 6-4 to move through to the final four.

“She’s quite tricky, she plays differently to a lot of other players out there so it’s going to be tough and she’s a good competitor as well,” Sanders said of Rodionova.

“I’m going to have to freshen up a bit now and I think it’s going to be pretty hot Saturday, too, so I’ll just get ready for a tough battle again.”

It was very warm at Melbourne Park by the time Sanders, the sixth seed, and Myers took to the court.

Both are back competing regularly after being plagued with injuries in recent seasons and approached the match with similarly aggressive game styles.

Myers, down a break in the first set, stormed back to take it on the back of big serving and vicious forehands, until Sanders settled in the second, finding the range with her stinging left-handed game.

The third was a set full of momentum swings; players traded impressive winners with loose errors.

Yet Sanders – who peaked at a career-high ranking of No.202 in … and who has been a member of Australia’s Fed Cup team – seemed to have a little more experience and composure when it counted.

“It was a tough one. I watched her play Jess (Moore) on Tuesday and Abbie’s striking the ball really well. I think these courts really suit her and she’s obviously really aggressive, and we both play very similar games,” Sanders said.

“I knew it was going to be quite tough – it’s kind of whoever gets the first ball in is going to win the point and who can stay the most solid as well, because we can both kind of go up and down.

“It’s obviously great that I’ve got two matches under my belt … I’m feeling pretty good – no injuries, touch wood. So it’s great to come out and play and obviously it’s a good chance to keep building on my game and getting match practice in.

“The wildcard is up for grabs as well so it’s just an extra bonus to look forward to.”

In other results, Maddison Inglis ousted Kaylah McPhee – the player responsible for upsetting top seed Olivia Rogowska – in straight sets to move into the semifinals, where she will face either Naiktha Bains or Belinda Woolcock.