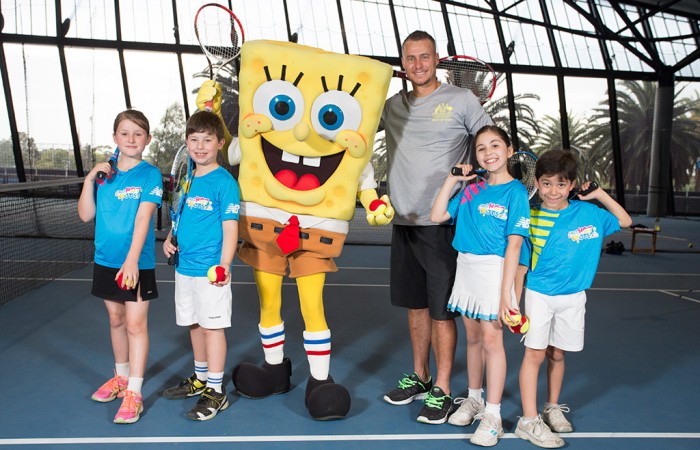 Ahead of his 20th Australian Open campaign, Lleyton Hewitt will headline the fourth annual Kids Tennis Day presented by Nickelodeon on Saturday 16 January at Melbourne Park.

Hewitt will be joined by some of the world’s best tennis players as well as Nickelodeon’s SpongeBob SquarePants, Dora the Explorer, Teenage Mutant Ninja Turtles, Patrick Star and entertainers for some fun on centre court at the Rod Laver Arena Spectacular next month.

Throughout the day kids will have the chance to experience tennis and play ANZ Tennis Hot Shots with qualified coaches, see Nickelodeon character stage shows, watch players practice and visit Grand Slam Oval ahead of the tournament’s first day.

“Kids Tennis Day is about engaging, introducing and educating the next generation about tennis and the Australian Open in a fun, relaxed way,” Hewitt said.

“I was fortunate enough to be involved in the game at a young age, receiving coaching, playing at a club and visiting the Australian Open every year.

“I made a point of spending time around the practice courts watching the big names go about their business. It was fun and enjoyable and that is the best way for parents to approach their children playing, by making sure they enjoy themselves as it will help them to learn easily.”

Craig Tiley, Tennis Australia CEO added: “Kids Tennis Day presented by Nickelodeon is the country’s biggest kids’ event of the summer and it continues to introduce families to tennis.

“In 2015 almost 14,500 fans attended Kids Tennis Day. It’s a day that brings some of the greats of our sport together with the future generation to drive the message that tennis is a sport for life. It’s all about picking up a racquet and having a go no matter what age or ability.”

Kids Tennis Day presented by Nickelodeon runs from 8am to 1pm on Saturday 16 January at Melbourne Park, home of the Australian Open.

Tickets are selling fast via Ticketek. Kids under the age of 16 are FREE but will require a ticket to enter. Adults are $15. Ground passes will be available to purchase should the Rod Laver Arena Spectacular sell out.

Highlights of Kids Tennis Day presented by Nickelodeon include: