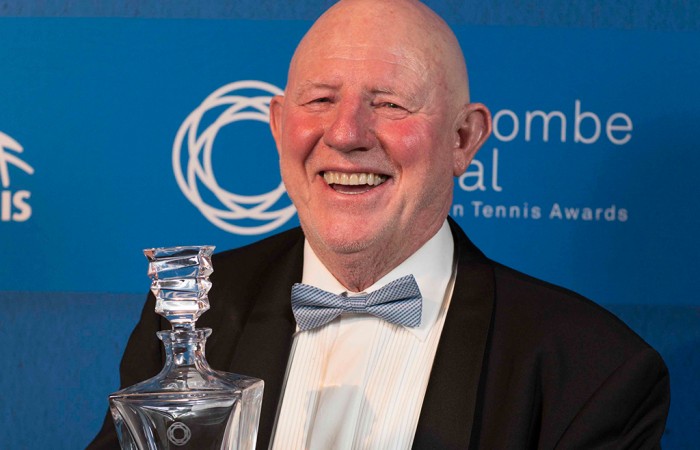 The legendary coaching career of Australian Ray Ruffels has been celebrated with The President’s Spirit of Tennis Award.

The award, one of the most prestigious of the Newcombe Medal, Australian Tennis Awards evening, was presented to Ruffels by Tennis Australia President Steve Healy.

“The President’s Spirit of Tennis Award recognises an individual who has personified the essence of leadership, passion, sportsmanship, goodwill and dedication to the sport while making a major contribution to the stature of tennis,” Healy said.

“Tonight we celebrate a man who has been at the forefront of the game both on and off the court for the last 50 years … (and) whose love, passion and dedication to the game has stood the test of time.”

Ruffels established the AIS tennis program in Canberra and was Australia’s national coach from 1980 to 1982.

He also worked with doubles legend Todd Woodbridge for 14 years, from Woodbridge’s junior days through to a joint arrangement with Woodbridge’s long-time doubles partner Mark Woodforde.

Ruffels’ glittering coaching career followed on from a Grand-Slam winning playing career, during which he won the Australian Open 1976 men’s doubles title with compatriot Allan Stone. He finished his career with 16 doubles titles.

In singles, he reached Australian Open semifinals in 1968, 1969 and 1976, plus a Wimbledon quarterfinal in 1967. In mixed doubles he was a Wimbledon and US Open finalist with the legendary Billie Jean King.

“There are so many people I’ve travelled around the world with in this room and I must say I’ve had a hell of a time doing it,” Ruffels said as he accepted the award. “I’ve enjoyed the hard work and the ups and downs. I’ve had a wonderful time in tennis.

“This is a very big surprise and one that I appreciate very much.”

“I consider Ray a father figure in my life. Not only was he my tennis coach, I spent more time with him over that period than with my own dad,” Woodbridge said.

“The thing that I most recall was his belief in his players. As a coach, Ray didn’t teach just tennis. He also taught the importance of being a good person who was able to cope with life.

“Ray in my career played many roles – he was my tennis coach, mentor, psychologist and father figure.

“As a coach Ray didn’t seek the limelight, and for that reason perhaps hasn’t been given the recognition that he deserved.

“I know that this award will give him the greatest satisfaction.”