Having only just returned to competitive tennis in the past month, Tammi Patterson has landed an Australian Open main draw wildcard. 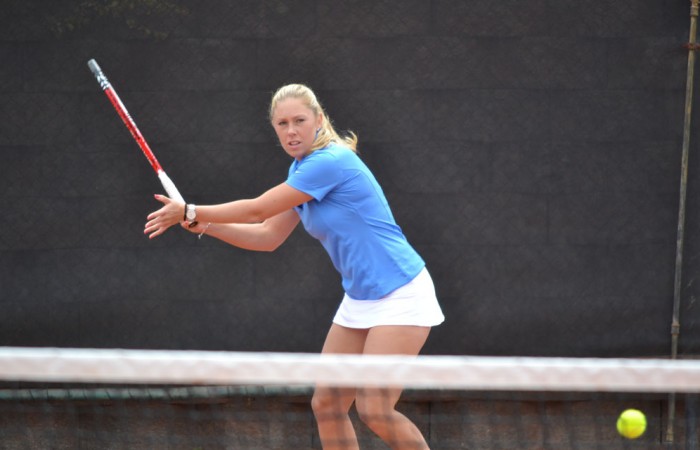 Earlier this year, Tammi Patterson’s career was in limbo.

The big-hitting Victorian had been stymied by repeat injuries and had focused instead on tennis coaching at Melbourne Park.

Yet having only returned to competition a few weeks ago, she now finds herself a starter at Australian Open 2016.

Patterson has been awarded a wildcard into the main draw of the year’s first Grand Slam event thanks to her impressive results on the Australian Pro Tour.

The call she received from Nicole Pratt, the head of professional women’s tennis in Australia, set off an emotional response.

“I didn’t know (I was eligible for the wildcard). Nicole called me and I was like, are you being for real right now? And Dash (Daria Gavrilova) was in the car as well so she heard it all,” the 25-year-old said at Melbourne Park’s National Tennis Centre on Friday.

“I was over the moon. I started crying. Yeah, it was amazing. I’m really happy and I’m so excited.”

Patterson used her baseline power to storm into the semifinals of the recent William Loud Bendigo International, a tournament at which she overwhelmed top seed Eri Hozumi in the quarters.

Prior to that, she made the quarterfinals of the Pro Tour event in Tweed Heads as well as the semifinals in Cairns, where she won five matches in a row after beginning in qualifying.

She also came through qualifying in Bendigo, building a six-match winning streak en route to the last four.

Pratt explained that the main draw wildcard was awarded to the Australian player who accrued the most points across the $50,000 Pro Tour events in Canberra and Bendigo.

“A new initiative we put in place this year is that we feel it’s really important that the players earn their spot in tournaments,” Pratt said.

“And now we feel that Tammi can go in there confident that she’s earned the right to play in Australian Open 2016 and also have the confidence that she belongs among the very best in the world.”

Gavrilova, who joined Patterson and Pratt at the announcement, can relate to what Patterson is experiencing.

“Last year when I won I was really happy. It was great timing for me because obviously I was out for nine months (earlier with injury),” she said.

“Then I played December Showdown but all the girls from other countries didn’t have those matches so it was great to get that under my belt. I felt ready for all the Australian summer and then had some good results throughout the whole year, so that was a big boost for me.”

For Patterson, the first priority is to get her body consistently healthy; her latest injury was a torn Achilles tendon.

Then, the focus is on scaling the rankings. Just over one month ago she was ranked outside the top 1,000, but now sits at an improved mark of No.461.

According to Pratt, the next target would be a ranking of between 100 and 250, currently a bracket largely devoid of Australian women but which is necessary for competing at Grand Slam level in qualifying.

“I’d like to see someone like Tammi move up into that space very, very quickly,” Pratt said.

“Throughout the years I’ve always had the hitting ability and I think now I can see that I’ve got that and I’m believing in myself a bit more now. I just think I’ve grown up and I understand the game a little bit better.

“If I can do a year like what Dash did, then that’d be amazing, yeah.”

As part of the Pro Tour wildcard initiative, Jess Moore and Storm Sanders were awarded a main draw doubles wildcard into Australian Open 2016, while Priscilla Hon scored a qualifying wildcard after her strong results at $25,000 events in Brisbane, Toowoomba and Cairns.