In the lead up to next week's Newcombe Medal, we review the impressive 2015 seasons of our six finalists. Today we feature the vastly improved Sam Groth. 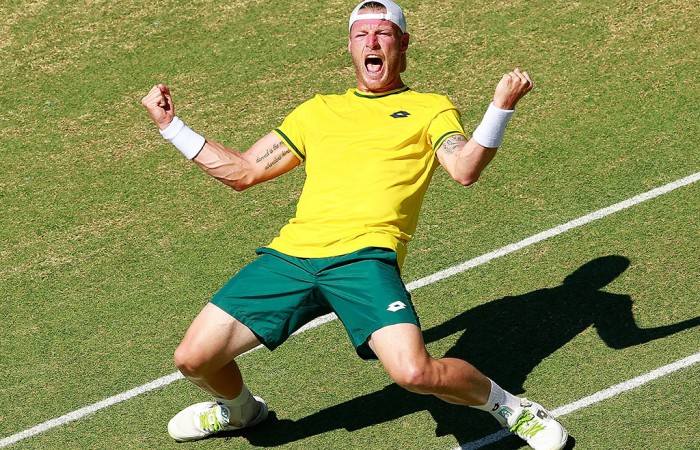 Late-blooming success stories are always among the most heart-warming.

Sam Groth’s transformation from tour journeyman to a player verging on the top 50 and challenging the game’s best certainly qualifies as one of those stories.

The 28-year-old produced a fine season full of firsts, including a maiden appearance in the last 32 at a Grand Slam and multiple victories over top 20 opponents.

For his efforts, he finds himself among the six finalists for this year’s Newcombe Medal.

“I’m excited,” Groth said of being nominated for the award that recognises Australia’s most outstanding player and ambassador for the sport.

“To get the news that I’m nominated for the Newcombe Medal sort of gave me the chance to reflect on my year and think about it a little bit more, and for me it’s a great way to cap off what’s been probably my best year on tour.”

His year began on a strong note with a trip to the quarterfinals at the Brisbane International and a third-round showing at Melbourne Park.

Challenger titles in Taiwan and Manchester followed, the latter kicking off an excellent grasscourt season that saw the powerful Aussie also reach the quarterfinals in Stuttgart and the third round at Wimbledon.

Success on the lawns continued for Groth when he donned the green and gold in Australia’s Davis Cup quarterfinal tie against Kazakhstan. On a purpose-built grass court in Darwin, he won his first-ever live Davis Cup singles rubber with a four-set victory over Mikhail Kukushkin, a day after combining with Lleyton Hewitt to win the all-important doubles rubber when Australia trailed 0-2. The hosts went on to claim a memorable 3-2 victory.

A solid US summer hardcourt season followed, during which Groth reached his third ATP quarterfinal of the year in Washington DC before upsetting world No.39 Alexandr Dolgopolov en route to the second round at Flushing Meadows.

A right foot injury necessitating surgery prematurely cut his season short, but not before he’d improved his ranking from 93rd in early April to a peak of No.53, first achieved in August.

“Obviously the last month has been difficult for me with the injury I’ve got, so it put maybe a touch of a dampener on a great season for me,” he said.

“I had two runs to the third rounds of Grand Slams, in Australia – doing that at home was amazing – and at Wimbledon, which I probably dreamed of to play as a kid and playing Roger (Federer) on Centre Court in the third round there and taking a set.

“Being a part of Davis Cup and what happened in Darwin was a big one – that was for me probably the biggest thing I’ve achieved and been part of and it was probably the most exciting time I’ve ever had on a tennis court. To do it along with Lleyton who’s obviously had such a rich history in Davis Cup and been so good for his whole career and to do that at home and on grass, which is a surface which I love, it was sort of hard for me to put that experience into words.”

Groth can’t pin-point one central factor in his dramatic improvement over the past two years. He began 2014 ranked No.172 before cracking the top 100 in September of that year.

Instead, it’s been a combination of elements that have delivered the popular Aussie an increasing number of memorable, significant results.

“I think it’s been a gradual improvement for me. I don’t think there’s been any massive changes,” he observed.

“Obviously I’m still working hard and I’m still improving all aspects of my game. Physically I’m getting better and I think I’m just understanding myself a lot more as a tennis player as well which is important.

“My game’s very different to most guys on tour so it’s all been about working out what’s best for me.”

With another year of top-level ATP tennis under his belt and with the hope that recovery from his latest injury will be a speedy one, Groth will set his sights on his next goal – a place in the top 50.

That such a milestone could be achieved with solid results on home soil in January – potentially as the reigning Newcombe Medallist – would make it all the more sweet.