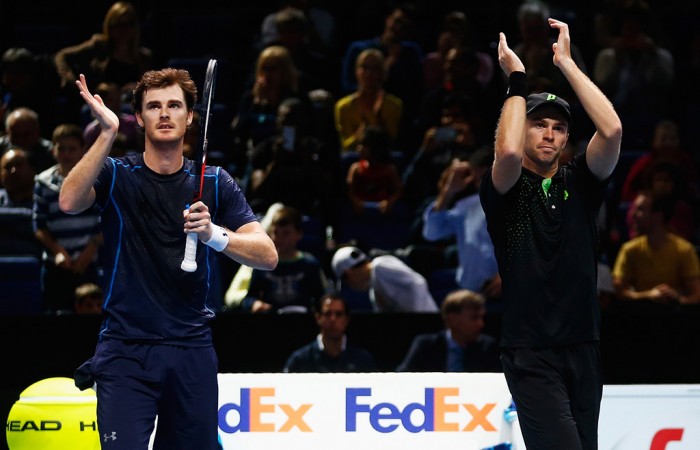 Murray and Peers are seeded fourth in the doubles at the O2 Arena after a superb season, in which they reached the final at both Wimbledon and the US Open.

They were in fine form in Sunday’s opening match of the end-of-season tournament in London, holding their nerve to win the deciding match tie-break and clinch a 7-6(5) 3-6 [11-9] victory.

“The match today was a very tight one. Both teams very solid all day and the scoreline showed that. We did great in the super tiebreak to hang tough and win several 50-50 points to win,” Peers reflected.

Murray is only the second British player to qualify for the doubles after Jonny Marray since the event moved to the O2 in 2009 and a good crowd was in place to watch the Scot.

“Playing at the O2 Arena is an amazing experience. The crowd was behind us all day and were on the edge of their seats. Playing in front of 17,000 people is great fun,” Peers said.

“The atmosphere from a crowd at that level is something we don’t usually get to play in front of.”

The pair looked confident from the off and deservedly took the opening set on a tie-break after seeing a set point go begging in the 10th game.

They recovered from 4-1 down in the second to 4-3 but a mistake from Murray gave the Italians another break and they levelled the match.

That left proceedings to be decided by a match tie-break, with the winner the first to 10 points, or by two clear points thereafter.

It was nip and tuck all the way through but a crucial mini-break for 10-9 left Murray serving for victory, and a smash from Peers proved too hot for the Italians to handle.

The victory gives Murray and Peers, who are playing their final tournament together before parting ways, a great chance of reaching the semifinals.

Jamie and I will take a lot of confidence into the next match after putting in a good performance today,” Peers said.

“We both fought very hard and stayed steady all match. For the next match we need to just maintain what we did today, focus on what we need to take care of and let everything else take care of itself.”