Rafael Nadal will head an international team taking on an Australian outfit featuring Lleyton Hewitt and Nick Kyrgios in a FAST4 thriller at Allphones Arena. 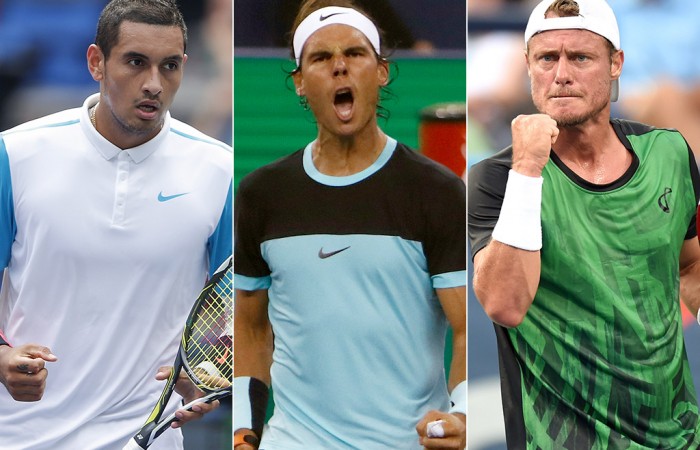 Spanish 14-time Grand Slam champion Rafael Nadal will take the court in Sydney for the first time since 2007 as the dynamic FAST4 Tennis format returns to the Harbour City on Monday 11 January.

Following the successful global launch of FAST4 Tennis with Roger Federer and Lleyton Hewitt at Qantas Credit Union Arena in January this year, the Roland Garros record holder and former World No.1 will headline Australia vs. The World in FAST4 Tennis at Allphones Arena.

In another world first, Nadal will team up with French World No.20 Gael Monfils and seven-time Grand Slam singles champion John McEnroe (USA) to form The World team as they take on Australia’s best in the first FAST4 Tennis team event.

Nadal, widely regarded as the greatest clay court player of all time, is the holder of nine French Open singles titles, two Wimbledon titles, two US Open titles and one Australian Open title. In 2010 he became the youngest male in the Open Era to achieve a career Grand Slam and in 2014 became the only male player to win at least one Grand Slam title for ten consecutive years.

The 29-year-old is familiar with the FAST4 Tennis format, having entertained Margaret Court Arena in Melbourne in January for Rafa’s Summer Set.

“I enjoyed playing the format in Melbourne this year and think it’s very exciting for both players and fans. It’s easy for the crowd to get involved in every point which makes for a great atmosphere.

“I haven’t played in Sydney for a long time but I know it’s an amazing city and Australian tennis fans are some of the best in the world so I’m excited to come back.”

Sydney’s inaugural FAST4 Tennis event, One Night with Federer and Hewitt, was a massive success with tickets selling out in less than 72 hours and a capacity crowd of 12,340 packing Qantas Credit Union Arena to see two greats go head-to-head.

More than 2.4 million Australians tuned in to watch on TV, with the event broadcast to a further 207 countries around the world.

After facing one of the all-time greats the first time round, Hewitt said he was looking forward to facing another in Nadal, this time with teammates.

“Playing Roger in January in front of a sold out crowd and being part of the first ever FAST4 Tennis showcase in Sydney was an awesome experience,” said the dual Grand Slam champion.

“The atmosphere and crowd engagement was just amazing and I can’t wait to see what it will be like with the new team’s format.

“Rafa, Gael and John form a pretty formidable team but I can’t wait to take it to them with Nick and Pat. I’m really looking forward to getting out on court again in Sydney and having some fun, but Team Australia will definitely be out to win.”

Minister for Trade, Tourism and Major Events and Minister for Sport, Stuart Ayres said that the FAST4 Tennis match has been secured exclusively for Sydney by the NSW Government, through its tourism and major events agency Destination NSW, and is sure to attract visitors from around Australia and the world.

“Rafael Nadal is a legend of the game, and it will be great to see him in Sydney on 12 January to play FAST4 Tennis – a great, new, fast format of tennis first seen anywhere in the world in Sydney last year.

“The event is sure to be a packed house at Allphones Arena and forms part of a bumper events calendar for Sydney over the summer months. I’d encourage all sports fans to come to NSW for FAST4 Tennis and experience everything our Harbour City has to offer in January.”

Tennis Australia CEO Craig Tiley was confident the second FAST4 Tennis event in January would firmly establish Sydney as the home of the format.

“The global launch of FAST4 Tennis in Sydney this year was a huge success for tennis and having the support of players like Roger Federer, Rafael Nadal and Lleyton Hewitt shows just how exciting the format is,” said Tiley.

“FAST4 has really taken off at grassroots level around Australia and is starting to take hold overseas, with programs being introduced in Asia and the USA.

“Nadal is one of the greats and we’re absolutely thrilled he will be supporting FAST4 Tennis for a second year, this time in Sydney.”

FAST4 Tennis is the innovative new format developed by Tennis Australia and launched 10 months ago in Sydney.

Designed for the time poor tennis player, the four principle rules of FAST4 Tennis include no-advantage scoring, playing lets, a tiebreaker at three games all and first to four games wins. In 2016 a Power Play will be introduced, allowing each player to nominate one point each set that is worth two points to the winner.

Australia v The World in FAST4 Tennis will take place from 6pm at Allphones Arena on Monday, 11 January 2016, with the NSW Government’s tourism and major event’s agency Destination NSW as strategic partner.

Tickets will go on sale to the general public tomorrow, Friday 13 November at 12 noon and can be purchased online at www.ticketek.com.au/Fast4Sydney or by calling 13 28 49.

Catch all the action from your own premium courtside box or entertain in style with the ShowView Dining experience. To book your Corporate Hospitality, please visit www.ticketek.com.au/Fast4Hosp or call 1300 645 229.

A full rundown of FAST4 Tennis rules can be found here

Australia vs. The World in FAST4 Tennis

Australia vs. The World