Russian-born Aussie Daria Gavrilova announced herself as one of the sport's most exciting talents after some spectacular gains in 2015. 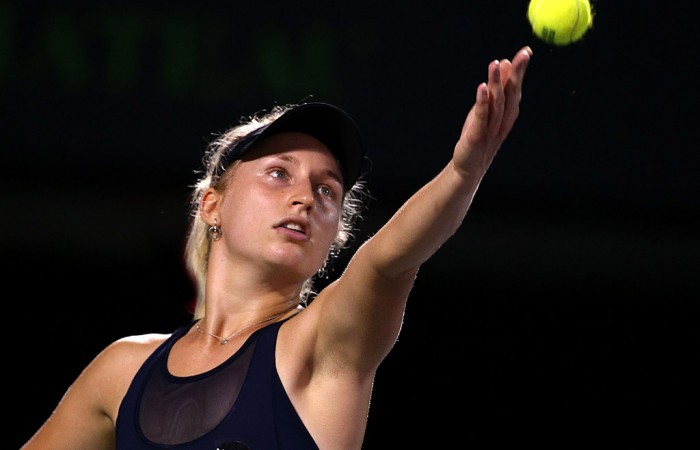 There’s a compelling argument that Daria Gavrilova deserves the gong for the most improved women’s player of the year.

Few on the WTA tour could match the 21-year-old’s meteoric ascent in 2015, a season she began ranked a lowly 231st yet finished at No.36 with a glittering win-loss record of 44-23.

Some career-defining wins, several impressive runs at big tournaments and the intelligent application of a vastly-improved game paid dividends for the Melbourne-based Russian, who is in the process of gaining Australian citizenship.

A former world No.1 junior once mentored by Martina Hingis, Gavrilova began the year by winning three rounds of qualifying at the Brisbane International, where she was eventually stopped by world No.9 Angelique Kerber. A week later in Sydney she came close to toppling Kerber in a marathon three-setter, a sign that she could hang with the best in the game.

After the Australian Open she captured back-to-back ITF $50,000 titles in Tasmania, pushing her ranking onto the cusp of the top 100.

But it was in Miami where she truly broke through.

She upset the Russian champion in straight sets before ultimately going down in the fourth round. “I have been dreaming about beating Maria since I was probably 12 when I saw her win Wimbledon, when she beat Serena,” Gavrilova revealed. “I was like, ‘Oh, I really want to play her and beat her’. I was probably visualising beating her since I was 12.”

Two tournaments later, in Rome, Gavrilova continued her winning ways. Forced to qualify, she then ousted in succession Belinda Bencic, No.7 seed Ana Ivanovic and Timea Bacsinszky – all now ranked inside the top 20 – en route to the semifinals, where Sharapova gained revenge.

It was Gavrilova’s gritty, three-set win over Ivanovic in particular – played out on a packed Pietrangeli court – that signalled her as a genuine star on the rise.

Thanks to her run in Rome, she cracked the world’s top 50.

The second half of the year was quieter for Gavrilova, although she managed to reach quarterfinals in Eastbourne and Hong Kong and the third round at the Rogers Cup in Toronto, where she beat Roland Garros finalist and then world No.7 Lucie Safarova for her third top 10 win of the season.

Gavrilova’s connection to her adopted country runs deep. She is coached by former top 40 player Nicole Pratt and is in a steady relationship with Aussie young gun Luke Saville. She and Saville live together in Melbourne.

And Aussie fans have embraced her, captivated by her gritty competitiveness, bouncy on-court energy and sunny demeanour off it.

If her successes this season were any indicator, those fans can expect many more exciting results from Gavrilova in 2016.