John McEnroe and Mark Philippoussis will head to the Harbour City as exciting Legends actions returns to Apia International Sydney in 2016. 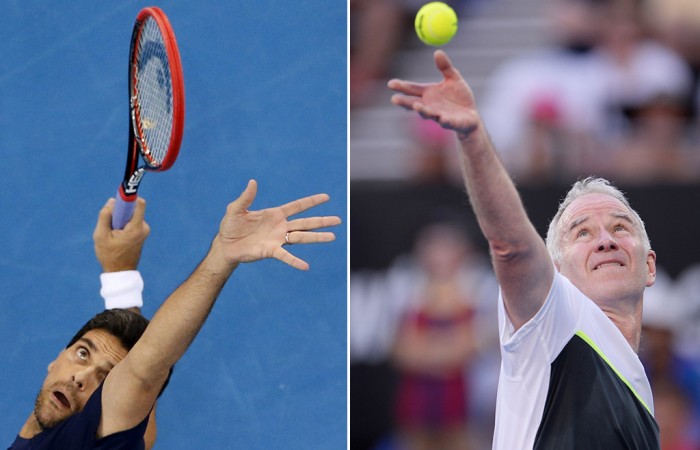 McEnroe, who faced off against two-time US Open winner and former Australian Davis Cup Captain Pat Rafter in front of a sold-out crowd in January, will return to Ken Rosewall Arena on Friday 15 January.

The multiple Wimbledon and US Open champion will meet French entertainer Henri Leconte this time around in a FAST4 Tennis match ahead of the women’s final.

On Saturday night, Philippoussis will take on Wimbledon record holder Goran Ivanisevic ahead of the men’s final.

McEnroe and Leconte met eight times during their active careers, with the 56-year-old American winning all of them.

“Henri Leconte has always been a tough opponent so I am working hard to be able to bring my best tennis to Sydney,” said McEnroe.

“I had a great time playing at the Apia International Sydney earlier this year, so I am really looking forward to returning again in January. I’ve always enjoyed playing in Sydney, in front of some of the best tennis fans in the world.”

Leconte, who reached a career high No.6 in the world and was a finalist at the French Open, also competed in the Legends event in Sydney this year. Known as one of the most entertaining players on the Legends circuit, the 52-year-old has a happy history in Sydney.

“I love coming to Australia in January and I had a great time playing in Sydney this year. I have had some tough matches against John over the years and I think I am about due a win.

“I actually won the Sydney tournament in 1985 so I have a little advantage. We are both known for our behaviour on court, although very different, so I think it will be a very entertaining match.”

On the second night of Legends action, Australia’s dual Davis Cup champion Philippoussis will take on former world No.2 Ivanisevic in a battle of the heavy hitters.

Philippoussis and Ivanisevic met four times during their active careers, with the Croatian winning all but one.

Philippoussis, who now lives in the United States, said he was excited to return home and give FAST4 Tennis another go.

“Sydney isn’t somewhere I’ve been able to play a lot over my career so I’m excited to get out there on Ken Rosewall Arena,” said the 38-year-old.

“Goran is obviously an incredible player, a former Grand Slam champion, and I’m looking forward to playing him again. FAST4 Tennis is a format that really levels the playing field, anything can happen and I think that makes for a really exciting experience for those watching. Hopefully we can put on a show for the Sydney crowd.”

Ivanisevic, who remains the only person to win Wimbledon as a wildcard, has transitioned from player to coach, guiding countryman Marin Cilic to the US Open crown in 2014. He has a strong record in Sydney, reaching the finals in 1996 and semifinals in 1997.

“Sydney is one of the oldest tournaments on the Tour and has a fantastic history. I played there three times over my career and I was very happy to be invited back to play in the Legends event.

“Mark and I have played each other several times over the course of our careers and I always enjoy our matches. He will of course have that home support but I’m looking forward to another great match in Sydney.”

Apia International Sydney single session tickets and series packages are now available and can be purchased online at www.ticketek.com.au/booksydney or by calling 1300 888 104.