WTA Future Stars competitor Monique Burton has been recognised for her passion, courage and kindness on and off court with the Li Na Inspiration Award. 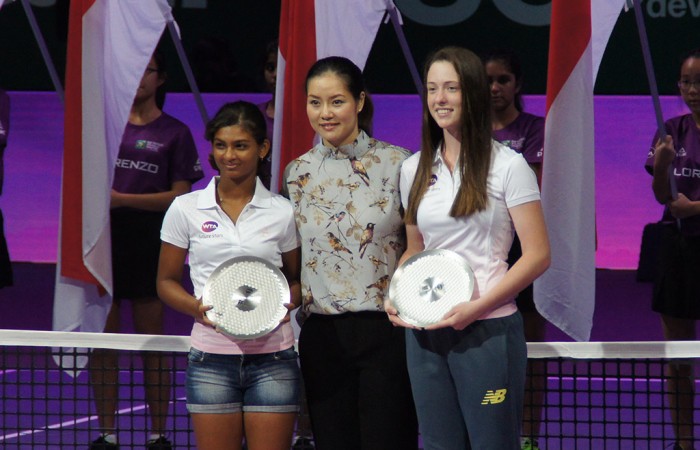 Australian Monique Burton has been honoured with the Li Na Inspiration Award in recognition of her outstanding competitive qualities during the WTA Future Stars event in Singapore.

Burton, from St Catherine’s School in Sydney, competed in the Future Stars under-16s event alongside players from 17 other nations throughout the Asia-Pacific region.

She received the award because she was the embodiment of the passion, courage and kindness that were hallmarks of Li’s trailblazing WTA career.

“It was such an honour to have won it. I was surprised. I was so happy,” said Burton, who was presented with the award by the Chinese former world No.2 in an on-court ceremony.

“(Li Na) is actually one of my favourite players now that I know a lot more about her and I’ve met her and seen what a lovely person she is and how humble and nice she is.”

The WTA Future Stars was one of the many events taking place during the week of the WTA Finals, the elite, eight-player WTA season-ending Championships.

During their time in Singapore, Burton and Tommaso enjoyed the opportunity to meet and hit with former world No.8 and now Australian Fed Cup captain Alicia Molik.

“It was great for me seeing I was in Singapore this week to be able to go and watch our junior players,” Molik said.

“I just think it’s an amazing initiative from the WTA to include the Future Stars and the Rising Stars in the Finals. Because I think it’s so important to provide opportunities for these young girls.

“I think the most important thing is that it’s not necessarily the No.1 and No.2 ranked girls from every nation, and I think that was the gratifying thing for me – the fact that they get to play alongside their idols and stars mean that potentially a career in tennis is tangible. They see it, they feel it.”

The WTA Future Stars event was launched last year and in 2015 was expanded to include several more countries, including Australia.

The initiative is designed to inspire the next generation of tennis professionals by allowing them to see and experience first hand the life of a female professional tennis player.

During their time in Singapore the young girls attended a welcome dinner, the official tournament draw ceremony at Marina Bay Sands, the opening ceremony, the WTA Fan Zone and community service activations.