Sam Stosur will meet world No.10 Angelique Kerber in the semifinals of the Hong Kong Open, while Daria Gavrilova fell in straight sets to Jelena Jankovic. 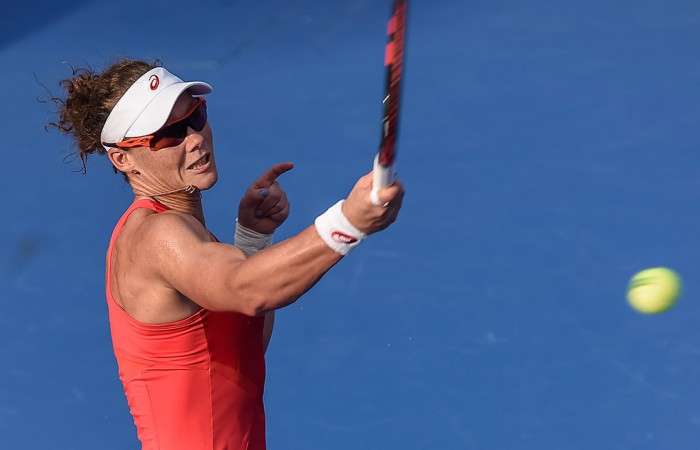 Sam Stosur will meet world No.10 Angelique Kerber in the semifinals of the Hong Kong Open after downing Heather Watson in three sets.

Watson took the first set and went 3-1 up in the second in their quarterfinal match on Friday, before the Australian turned on the power and took the match 4-6 6-3 6-0.

It’s a much needed boost for Stosur, who has suffered early exits in Tokyo, Wuhan and Beijing.

She eventually took the quarterfinal 7-5 6-3 with fast returns and deft touches at the net in a match which saw a succession of long deuce wrangles.

Elsewhere, Venus Williams took just an hour to secure her place in the semi-finals with a in a 6-1 6-1 victory against a lacklustre Alize Cornet.

The French player, who beat Williams’ sister Serena in their last three meets, struggled to gain a foothold in a match dominated by the seven-time Grand Slam winner.

“It’s never easy. We had some tough games there,” Williams said as she hopes to claw her way into the eight-player WTA Finals in Singapore later this month.

She is currently 11th in the Road to Singapore rankings after a resurgent season and Hong Kong is her last chance to get the points she needs.

Williams will meet Jelena Jankovic in the semifinals, after the fourth seed brushed aside another Aussie, Daria Gavrilova, for the loss of just two games.