With the curtain falling on Lleyton Hewitt's Davis Cup playing career, we reflect on some of his legendary achievements 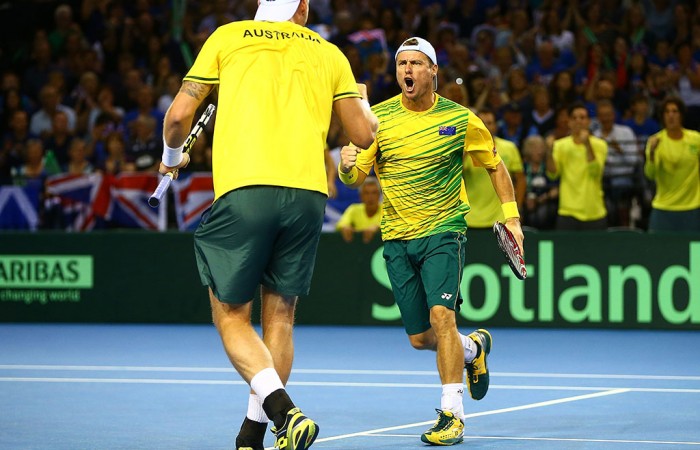 Australia’s defeat at the hands of Great Britain has bought the curtain down on Lleyton Hewitt’s glittering Davis Cup career.

The Aussie legend, who partnered Sam Groth in an epic five-set defeat to the Murray brothers over the weekend, has been a regular fixture on the Australian team since playing his first Davis Cup tie back in 1999.

But it’s not so much the number of wins that define Rusty’s career, it’s the manner in which he led the team to them. Time after time – and tie after tie – Hewitt’s ‘never-say-die’ attitude propelled Australia to the victory, even when everything seemed lost.

At no time was that more in evidence than when Lleyton spearheaded the Aussie revival against Kazakhstan in Darwin just a few months ago. Trailing 0-2 after the opening day, Hewitt and Groth went on to seal the doubles and both singles rubbers, propelling the Australians into the 2015 Davis Cup semifinals. It was the first time the team had come back from 0-2 since 1939.

It was classic Hewitt.

Over and over again, the competition has bought out the best in the Aussie legend. He’s played teams from every continent (apart from Antarctica – they don’t have one), and he’s cemented his place in Davis Cup folklore with numerous epic victories.

And then there’s Roger Federer. Few players can boast a winning record over the Swiss maestro. In the Davis Cup Lleyton Hewitt can (2-1).

Both of Lleyton’s wins over Roger had an element of epic about them, but their match at Rod Laver Arena in 2003 was nothing short of spectacular. With his back against the wall, Hewitt fought back to beat Federer in five fantastic sets. It was a win that would lead Australia to the 2003 final – and ultimately the Davis Cup title.

While Lleyton’s Davis Cup playing days are probably over (unless someone can persuade him not to hang up his racquet just yet), his involvement in the competition almost certainly isn’t. Ever-present for the last 17 years, he’s sure to be a fixture on the bench as the next generation of Aussie stars look to forge their names in Davis Cup folklore.

With Rusty on their side the future isn’t just looking bright, it’s looking Green and Gold.