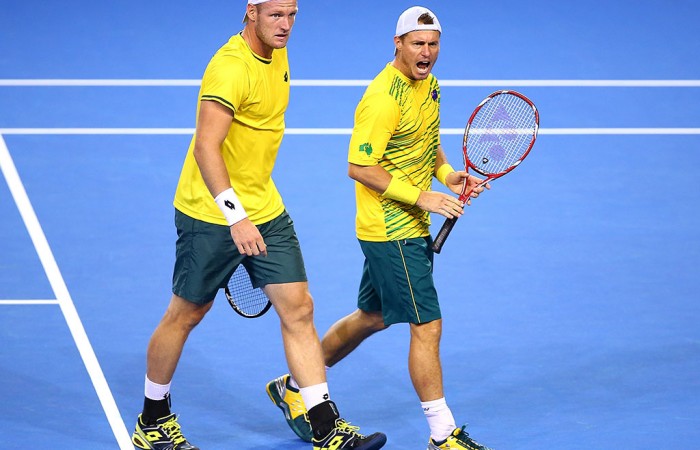 Great Britain have taken the lead in the Davis Cup semifinals with an epic victory in the crucial doubles rubber over the Aussies.

The thrilling five-set triumph gave Britain a 2-1 advantage in the best-of-five-match tie, leaving Bernard Tomic and Thanasi Kokkinakis needing to win both reverse singles rubbers on Sunday to snatch victory for Australia.

Australia appeared on track to claim the pivotal doubles point after charging to a 4-1 lead in the third set of the match. But after dominating for almost two hours, the Murray brothers suddenly stepped up a gear to seize the moment before 8000 mostly partisan British fans at the sellout arena.

Australia nabbed the first set after claiming the only break on Jamie Murray’s serve in the fifth game.

Groth was broken in the sixth game of the second set as the Murrays surged to level the match.

Undeterred, Australia hit straight back, breaking Andy’s first service game of the crucial third set before Hewitt held for 3-0 and skipped to the changeover chair.

Perhaps sensing an opportunity slipping away, Scotland’s dual grand slam champion smashed his racquet into cement after a mighty hold from Groth gave Australia a 4-1 lead.

The match turned, though, on a crazy rally late in the third set when some extraordinary scrambling from the Murrays forced Groth into an overhead error after he’d missed three put-aways with Hewitt serving at game point for 5-2.

Two more errors, one each from Groth and Hewitt, precipitated back-to-back breaks against Australia as the hosts snatched back the momentum with a two-sets-to-one lead after peeling off five straight games.

Digging deep, the Australians saved a match point in the tense fourth-set tiebreaker to force the deciding set.

Groth had a difficult service game to drop serve at love with three volley blunders and a double-fault to gift Great Britain a 2-0 lead.

From 3-0 down, the Australians broke back to raise hopes a great escape.

Understandably shaky in the Davis Cup pressure cooker, Groth mouthed “I can’t hold, I can’t hold” before hanging tough to level the set up at 3-3.

Alas, Groth dropped serve while trying to stay in the match as Britain closed out the cliffhanger after three hours and 56 minutes.