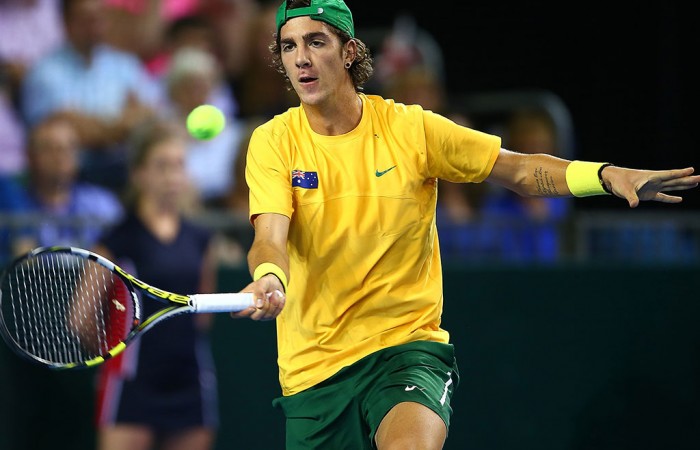 Andy Murray has drawn first blood for Great Britain with a straight-sets win Thanasi Kokkinakis in the opening rubber of Australia’s Davis Cup semi-final in Glasgow.

The fierce patriotic fervour inside the Emirates Arena swept Murray to a 6-3 6-0 6-3 victory in one hour and 47 minutes.

Boasting a 23-2 win-loss record in Davis Cup singles, and undefeated in a home tie, Murray played sublimely to raise hopes of Great Britain reaching their first final in 37 years.

The world No.3 broke Kokkinakis six times and dropped just six points on his own service throughout the entire match.

Murray’s victory earned Britain its first live-rubber point in a Davis Cup tie against Australia since 1978.

Kokkinakis had started confidently enough, firing down a 170km/hr second-serve ace in his opening service game.

But he followed up with a double-fault to quickly find himself down his first break point of the match.

The youngster did well to block out ever-growing chants of “oooooh” with successive service lets to save the break point with a nerveless backhand volley drop shot before safely holding for 1-1.

Kokkinakis stared down two more break points at 15-40 in his second game, but again held firm.

The teenager’s resistance was finally broken on his sixth break point as Murray snared a 4-2 advantage before taking the first set after 44 minutes with his fourth ace.

Kokkinakis dropped serve for a second time in the opening game of the second set amid a run of 10 straight points to Murray.

The second set was as good as lost when Murray claimed a third break to charge to a 4-0 lead.

Looking eager to finish it and back up for Saturday’s all-important doubles, Murray completed the second-set bagel in 23 minutes to move in for the kill.

Kokkinakis tried to hang tough in the third set, but once Murray secured the break he sept through the set to take the win.