Groth goes down to Robredo

No.26 seed Tommy Robredo proved too strong for Sam Groth on Thursday, eliminating the Australian in straight sets in the second round of the US Open. 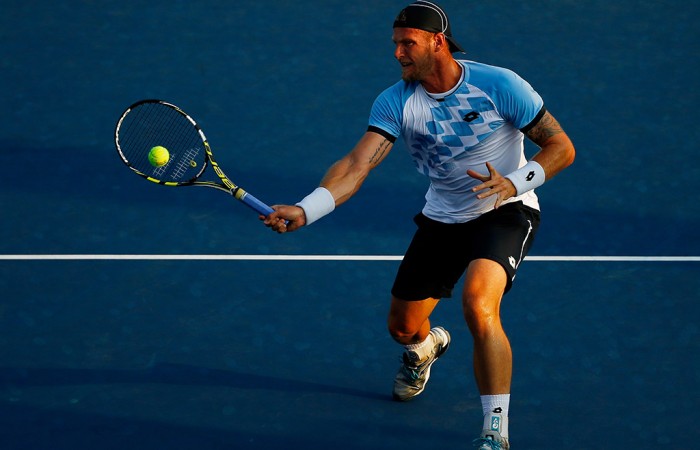 Sam Groth is dreaming of Davis Cup glory and an Australian Open seeding after having his breakout Grand Slam season ended by tough Spaniard Tommy Robredo.

Robredo had sent Roger Federer and Nick Kyrgios packing from Flushing Meadows the past two years and again delivered under New York’s bright lights with a 6-4 7-6(3) 6-4 second-round win over Groth on Wednesday night.

Groth rued an inability to convert a set point to tie the match up at a set apiece against the 26th seed.

“I’m super disappointed to lose but had it been one set all, it’s a completely different story,” said the world No.55, whose defeat left Bernard Tomic and Lleyton Hewitt as the last remaining Australians in the men’s singles draw.

Tomic, seeded 24th, and former champion Hewitt clash on Thursday in the first career meeting between the Davis Cup teammates.

Groth is partnering Hewitt in the doubles in New York in preparation for this month’s Davis Cup semifinal against Great Britain in Glasgow.

“A Davis Cup semifinal is massive. I’m excited about getting some work done here with the guys and getting over.

“I don’t know what our team is going to look like yet. At least for me, well, I think I’m going to be there.”

A hero of Australia’s 3-2 epic quarterfinal comeback win over Kazakhstan, Groth the team man will then switch his focus to individual pursuits.

“I haven’t got a hell of a lot of points to defend between now and the end of the year. So every match I win is going to be a positive.”

With a bunch of wins over top-20 rivals in 2015, plus third-round runs at the Australian Open and Wimbledon – where he nabbed a set off Roger Federer on tennis’s most famous centre court – has Groth feeling he now well and truly belongs among the elite.

A top-32 seeding at Melbourne Park in January isn’t beyond the power-serving 27-year-old.

“I’ll have to play really well but it’d be great to be seeded and not have to play against a seeded opponent for the first couple of rounds,” Groth said.