Lleyton Hewitt's progression to the second round over injured Aleksandr Nedovyesov has proven right his decision to schedule a trip to the US Open. 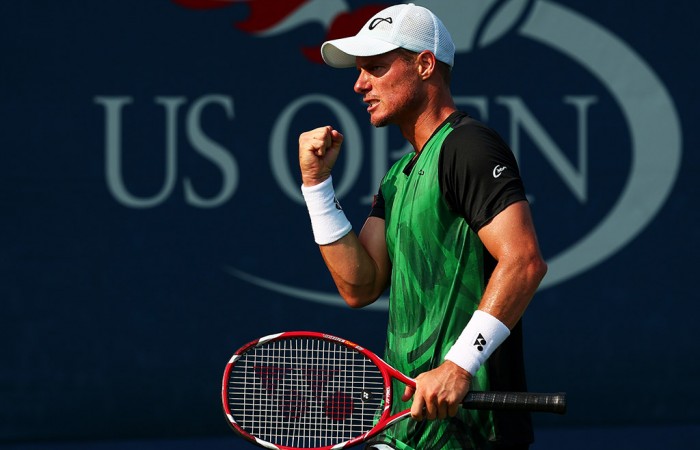 Update 8.25am: Lleyton Hewitt has progressed to the second round of the US Open after opponent Aleksandr Nedovyesov retired from their match with a shoulder injury.

It was the Australian’s second straight victory over Nedovyesov; Hewitt beat him in the fifth and decisive rubber of Australia’s recent Davis Cup quarterfinal against Kazakhstan in Darwin.

It was with an eye towards September’s Davis Cup semifinal in Britain that prompted Hewitt to accept a US Open wildcard, a tournament not originally in his 2015 schedule.

“After we won the Davis Cup (quarterfinal) tie, I wanted to play obviously. Wally (Masur) and Pat (Rafter), Joshua Eagle and Rochey (Tony Roche), everyone wanted me to play,” he said.

“Obviously take a wildcard, could have gone to another Aussie, but I felt like to give myself the best opportunity for the Davis Cup tie. It was the right decision.”

Hewitt was in scintillating form in the opening set, striking 12 winners and just two errors to win six straight games in a brisk 19 minutes.

Nedovyesov then received medical treatment on his shoulder, and it seemed to work – the second set was a far more competitive affair.

Yet Hewitt played clutch tennis in the tiebreak, rallying solidly and consistently and drawing errors from his opponent.

The former champion at Flushing Meadows claimed a two-sets-to-love lead.

“I felt like I got off to a great start. Came out and executed my game plan perfectly,” Hewitt said.

“Just through the second set he obviously started serving a little bit better. He’s an awkward opponent because I wanted to be aggressive and play on my terms, but it’s a bit hit-and-miss out there so you’re trying to make him play that extra shot as well.

“If you don’t get enough on it, he’s capable of hitting winners. I was happy to play a really good tiebreak.”

Nedovyesov was halfway through the second game of the third set when he decided he could not continue.

His retirement means that an astonishing 11 players have withdrawn from first round matches at this year’s tournament.

In the second round Hewitt could face compatriot Bernard Tomic, should the 24th seed get past Bosnia’s Damir Dzumhur.

“Just awkward. That’s the only thing to summarise that,” Hewitt said of the potential match-up.

“I get along great with Bernie. Helped him out a lot. Hit with him this week. Yeah, just awkward.”