Kokkinakis primed for US Open debut

In his first ever US Open main draw, Thanasi Kokkinakis gives himself a shot of upsetting Wimbledon semifinalist Richard Gasquet on Tuesday. 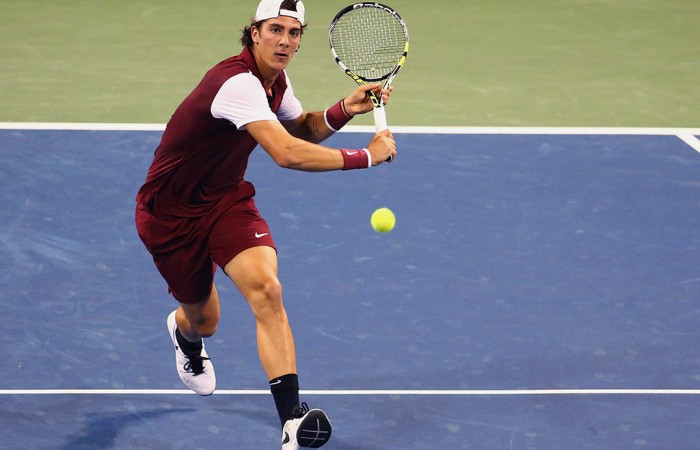 Physically and mentally revitalised, Thanasi Kokkinakis gives himself a shot of upsetting Wimbledon semifinalist Richard Gasquet on Tuesday to ignite his US Open campaign.

Kokkinakis is back to his fighting weight after a nasty bug attacked his system and shed 4kg from his 196cm frame in the week before Wimbledon.

Now he’s eager to atone for failing to progress beyond the opening round at a Grand Slam for the first time since debuting at Melbourne Park last year.

“I’m feeling more healthy. I’ve maintained weight, which is ideal,” Kokkinakis said on the eve of his main-draw debut at Flushing Meadows.

“I played the juniors two years ago and played well, made the final.

“I played qualifying last year and didn’t do as well as I liked so it’s going to be different playing the main draw.

“I can’t wait to get out there. I love a good atmosphere when you’re playing tennis. That’s why you play.”

Kokkinakis, the world No.70, is bracing for a tough time against Gasquet, the French 12th seed who eliminated compatriot Nick Kyrgios from Wimbledon.

But a proven big-match performer with Grand Slam and Davis Cup wins over a bunch of higher-ranked rivals, the teenager fancies his chances of claiming another scalp.

“It’s obviously a tough match, but I played him a couple of weeks ago in Cincy so I know what to expect,” Kokkinakis said.

“He’s a quality player, fresh off a semifinal at Wimbledon.

“But I had my chance to win the first set against him. I was up 4-1 serving in the tiebreaker so I know when I play well I can definitely match him and beat these guys.

“So I’ve just got to put it together on the day.”

An upset win over Gasquet would put Kokkinakis on the path to a potential third-round showdown with either Lleyton Hewitt or Bernard Tomic, who also play their openers on Tuesday.

> Aussies in action: US Open Day 2