Nick Kyrgios says his recent ATP sanctioning is "fair" as he prepares to take on world No.3 Andy Murray in a blockbuster first-round match at the US Open. 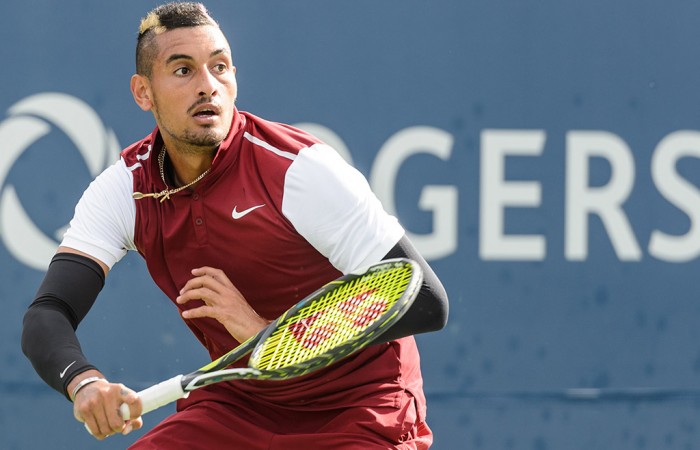 Kyrgios will be walking a fine line for the next six months after the ATP slapped a 28-day suspended ban on the young tennis player.

But in his first extended interview since also being slugged last week with a suspended fine of $US25,000 ($A34,900) for “aggravated behaviour”, a more contrite Kyrgios conceded he needed sanctioning.

“I think it’s fair. I deserved to be punished to some extent and obviously I’m still young,” Kyrgios said ahead of his blockbuster first-round US Open showdown with Andy Murray.

“They’ve given me the impression that they are going to start locking down on that sort of stuff so I’ve definitely learnt my lesson.”

Both sanctions will be waived if Kyrgios avoids any fines for verbal or physical abuse or doesn’t accumulate fines totalling more than $US5000 at ATP events before 24 February.

“So I obviously know I’ve got to keep everything in order and obviously be on my best behaviour out there,” said Australia’s two-time Grand Slam quarterfinalist.

“It’s going to be fine. If I have a lot of positive energy going out there, I think I’ll be fine.”

“That’s been massive, to have his support on the court and off the court,” he said.

“Whenever I’ve needed to talk to him, he’s been there. He’s taken time out for me, to spend time with myself and help Thanasi when he can as well, so I feel he’s been a massive influence.”