Todd Woodbridge believes that in Belinda Bencic, the women's game may finally have a player ready to step out from among the pack of hopefuls and make her mark at the top. 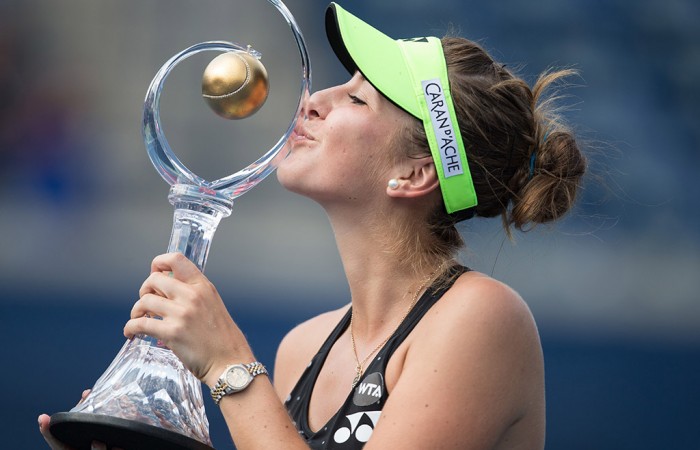 All the talk in women’s tennis is currently about Serena and her prospects of winning the Grand Slam.

But perhaps a more pressing issue is who is going to take over when she is gone?

It’s been a long time coming but finally we may have a player – in 18-year-old Belinda Bencic of Switzerland – who is ready to step out of the pack of hopefuls and make her mark at the top of the women’s game.

The Williams sisters have driven the women’s tour over the past 15 years but the WTA is in need a a new star, and quickly.

There have been a few fleeting starlets recently, but the reality is it’s tough at the top and it takes a special resilience to be able to absorb all the pressures that come with being a Grand Slam champion and world No.1.

With Serena potentially only having a few seasons left and Venus not the force she once was, you could almost hear the sigh of relief from the WTA when Bencic stormed through a tough field to win the Rogers Cup in Toronto last week.

Twelve months ago Eugenie Bouchard looked set to challenge for the top mantle, but the pressure and expectations seem to have been too much for her. She has much work to do if she is going to get over the huge slump she is currently mired in.

What does Bencic need to do from here?

Firstly, she must never read the press – whether it be good or bad.

Secondly, she should not rest on her laurels – she is working hard, but she can still work harder.

Thirdly, winning a Premier-level event is great. But the next step is to follow up this performance at a Grand Slam event – not necessarily immediately, but within the next two seasons.

Finally, she should find a way to keep Martina Hingis in her camp.

Hingis has been around Bencic as a hitting partner, mentor and most recently Fed Cup team mate and there is nobody more qualified to advise than she is. She knows everything the game can throw at you – be it good and bad – and she has come out the other end still loving the game of tennis.

Andy Murray did much the same in hiring Ivan Lendl; Murray was already good, but now he is great.

I’ll watch with interest the team of people Bencic chooses and in the end it will be the decisions made over the next 12 to 18 months on and off the court than will determine how good she can become.