Sam Groth has blasted 20 aces in a comprehensive win over Feliciano Lopez to advance to the quarterfinals of the Citi Open in Washington DC. 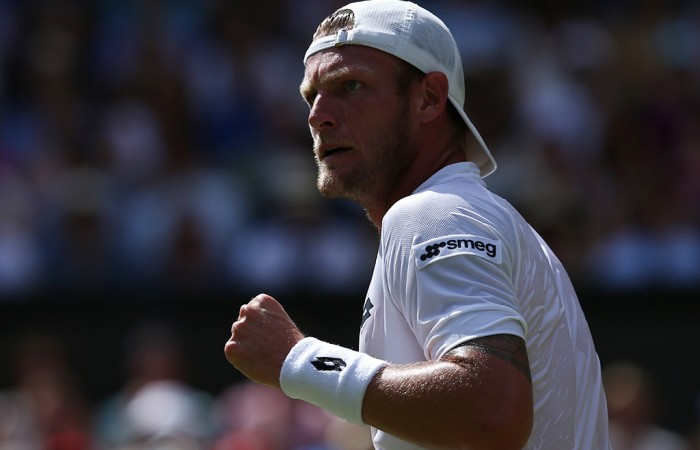 Update 2pm: Sam Groth will get the best gauge yet of his hardcourt form when he takes on last year’s US Open finalist Kei Nishikori in the quarterfinals of the ATP’s Citi Open in Washington DC.

The Australian blasted 20 aces in a comprehensive win over Feliciano Lopez on Thursday, adding another seeded scalp at the tournament in the American capital.

Groth, in the midst of a big year which has lifted him to a career-best ranking of world No.62, was typically powerful on serve in a 6-3 6-4 victory over the seventh-seeded Spaniard.

It added to wins over world No.20 and ninth seed, Serbian Viktor Troicki, on Tuesday and a first-round upset of Brazil’s world No.31 Thomaz Bellucci.

Groth – who advances to his first ever ATP quarterfinal at a 500-level tournament – will next face second seed Nishikori, who beat Argentina’s Leonardo Mayer 6-4 6-4.

It will be Groth and Nishikori’s first meeting.

The Japanese world No.5 accounted for Australian James Duckworth in the second round in his first match since he was forced to withdraw from Wimbledon due to a calf injury.

Although Nishikori will be a bit underdone just over three weeks from the start of the US Open, the match-up will nonetheless give Groth an idea of whether his power game can hold up against the game’s elite.

Nishikori made only seven unforced errors against Mayer, half as many winners as he produced in the one-hour victory.

“I’m going to have to play my game style. Nothing changes too much for me,” Groth said.

Nishikori last year became the first Asian man to reach a Grand Slam singles final when he met Marin Cilic in the decider at Flushing Meadow.

He was beaten in the decider by the Croat, who edged out 13th-seeded Sam Querrey of the United States 7-6(2) 7-6(3) to also reach the quarterfinals in Washington.

How close was it? Take away the tiebreakers, and Querrey won more total points, 74-67. He also compiled more winners, 32-25.