Lleyton Hewitt admits it will be tough for Australia to win this year's Davis Cup, but he's ready to give his heart and soul to try to achieve it. 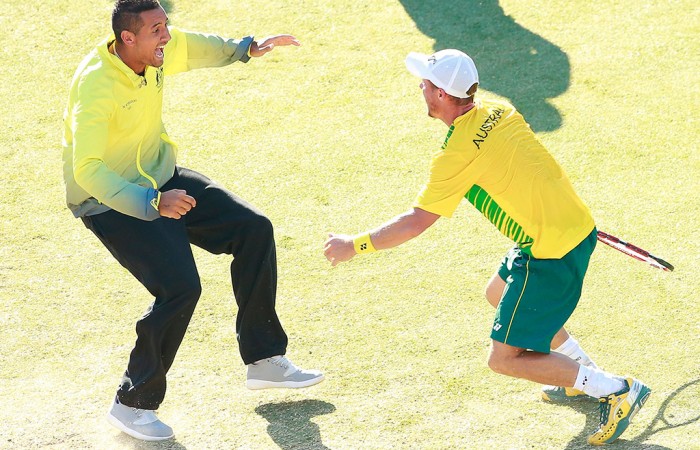 Two-time Grand Slam champion Lleyton Hewitt admits it will be tough for Australia to win this year’s Davis Cup, but he’s ready to give his heart and soul to try to achieve it.

Australia is through to the semifinals after scraping past Kazakhstan 3-2 in Darwin.

The Andy Murray-led Great Britain awaits Australia in an away tie in September, and Hewitt knows it will be a tricky challenge for his youth-laden side.

“Argentina play Belgium in the other half, which is probably the weaker section.

“The last three or four years, Davis Cup has been as big as any Grand Slam for me personally.

“When I make my schedule, everything has worked around the Davis Cup and trying to get the most out of myself.

“I feel like I can still play a mentor role in the team at the moment, especially on the doubles court.

“But these young guys (like Nick Kyrgios and Thanasi Kokkinakis) are the future of our team, and right at the moment I’m just trying to help them out as much as possible.”

A challenge facing Masur is getting the best out of Kyrgios, who was expected to spearhead Australia against Kazakhstan.

The 20-year-old was overlooked for the reverse singles rubber on Sunday after suffering a shock four-sets loss to world No.115 Aleksandr Nedovyesov on day one.

Kokkinakis also suffered a disappointing singles loss, but Masur said his ‘Special Ks’ remained an important part of the team.

“I hope that they realise that no one sits in judgment that they lost a tennis match,” Masur said.

Hewitt and Sam Groth were the heroes against Kazakhstan.

The pair joined forces to win Saturday’s doubles clash, before triumphing in their singles matches on Sunday.