Kazakhstan's Davis Cup captain Dias Doskarayev discusses his team's chances ahead of the quarterfinal tie against Australia next week. 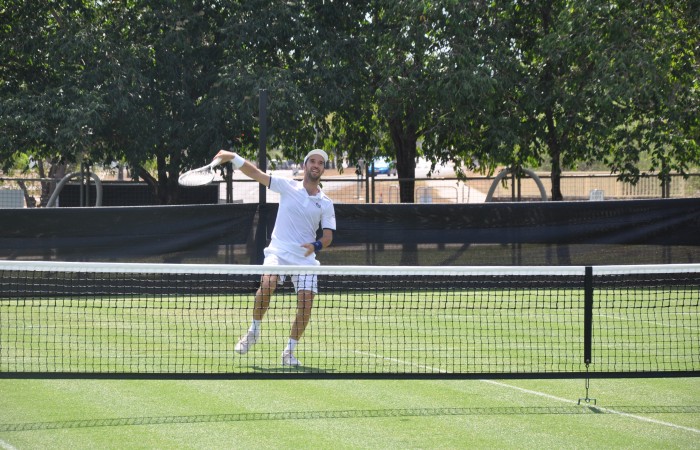 The dark horse Kazakhstanis have stolen a jump on Australia, already knuckling down to training in Darwin ahead of the grasscourt tie after arriving on Tuesday while the controversy-hit hosts aren’t expected until the weekend.

Despite reaching the quarter-finals in four of the past five years, they were quick to talk up the Australians.

“Australia is much better than we are, they are playing at home on their favourite surface… We will try to give our best on the court and we have nothing to lose,” said their top player Mikhail Kukushkin, the world No.59.

Doskarayev praised “entertaining and emotional” Nick Kyrgios and Thanasi Kokkinakis as great young players, said Sam Groth was strong on grass with a massive serve, and called Leyton Hewitt the “older brother” to the up-and-comers.

“All the players are experienced, they’re playing great tennis and they’re the favourites,” he said.

However, his team of Kukushkin, No.123 Aleksandr Nedovyesov, No.135 Andrey Golubev and No. 407 Dmitry Popko would be well prepared.

Kukushkin lost in the first round at Wimbledon, but only after three tough sets against former champion Andy Murray.

“He showed some good performance, maybe it’s a good sign he’s getting confidence from there, but our boys will be ready for sure,” he said.

Doskarayev said the Davis Cup was huge in Kazakhstan, a young country with only 25 years of independence from Russia, where tennis is the No.1 sport.

“It gives the self-belief, not just to tennis players but to all athletes in Kazakhstan, it’s very prestigious.”