Nick Kyrgios is set for a fourth round showing with Richard Gasquet at Wimbledon - and John Newcombe is among those who fancies the Australian's chances. 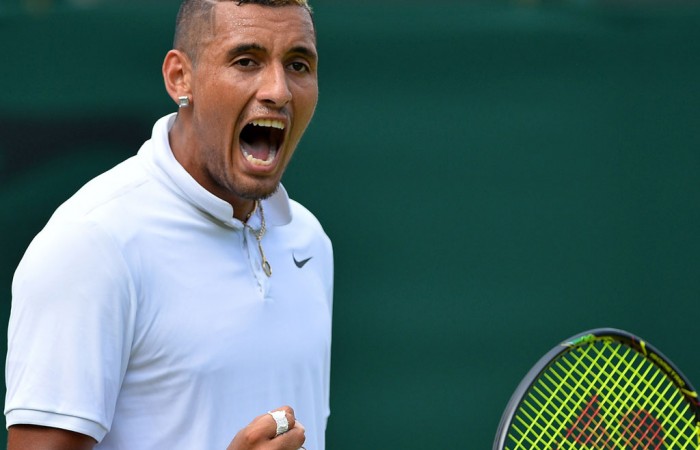 “It’s a big reach, but his rise has been so meteoric so far that he doesn’t know – and we don’t know – where his limits are at the moment,” Newcombe said ahead of Kyrgios’s fourth-round showdown with Richard Gasquet on Monday.

“Certainly the potential’s there and he’s certainly not afraid to grab the moments when they come.

Not only does Kyrgios believe he can go all the way and join Newcombe, Pat Cash and Lleyton Hewitt as only the fourth Australian man in the professional era to lift trophy, the 20-year-old is vowing to deliver in style.

“I feel you should express yourself. You know, it’s a sport,” Kyrgios said of his flashy on-court conduct.

The Canberra ace has an unabashed fan in three-time Wimbledon champion John McEnroe.

“This guy is one of the greatest talents in a long time, bursting with personality. Reminds me of 35 years ago,” McEnroe told the BBC after watching Kyrgios’s breathtaking four-set second-round triumph over world No.8 Milos Raonic.

Newcombe says the youngster’s flamboyance is all part of the overall package.

“He’s a free spirit out there and that’s how he performs at his best,” said Newcombe.

“I think he was having trouble for a set and a half playing against Milos because Milos gives you nothing.

“I had the feeling that Nick had to try to create some sort of flow to get into the match and in the end he did exceptionally well.

“The antics are a very small part of the whole package. If you look at the positive side of it, this kid’s got enormous talent.

“I think he’s only touching the edges of how good he can be.”

Kyrgios will be meeting Gasquet for the first time since fighting off a Grand Slam-record nine match points and recovering from two sets to love down in the second round last year to topple the Frenchman.

The victory catapulted the Australian to stardom and he backed up to beat Rafael Nadal to make the last eight of a major for the first time.

After repeating the run at Melbourne Park, Kyrgios has a huge chance to make the quarter-finals once again in his quest to become the youngest men’s winner at the All England Club since Boris Becker in 1986.

And tennis’s great entertainer plans to do it his way.

“When I’m in that state of mind, when I feel relaxed and I’m playing around, I think that’s when I play my best tennis,” Kyrgios said.