Sam Groth has exited Wimbledon - but not before a gallant fight against seven-time champion Roger Federer. 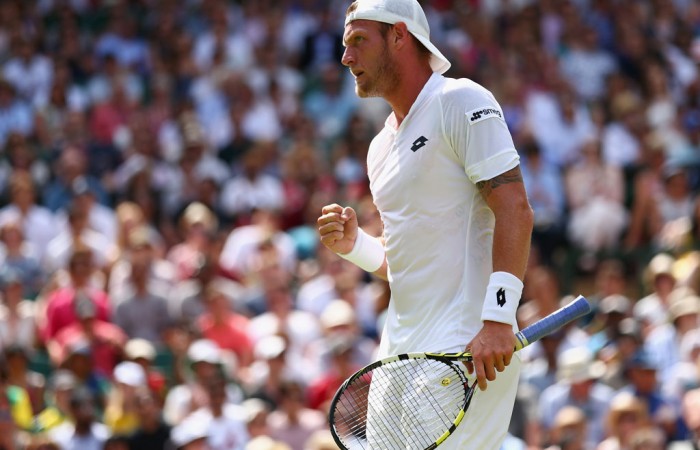 Sam Groth hopes to return as a Wimbledon title challenger after dragging the great Roger Federer out of his comfort zone in a gallant four-set third-round loss to the seven-times champion.

“I’m not just here to make up numbers and I think I proved that,” said the last of Australia’s classic serve-volleyers.

“I said beforehand, I generally thought I could give him trouble and in the back end of the second set and the third set, once I settled down, I started to give him trouble.

Groth, though, lamented the butterflies that undermined his big chance to pull off the biggest win of his career with Federer’s two-set start ultimately proving too much for the 27-year-old to reel in.

“I was just generally nervous, just couldn’t make any feel shots,” he said after playing in tennis’s most famous cathedral for the first time.

“He’s played a few more matches out there than I have. He’s probably a little more comfortable.

“But once I got into it, I really enjoyed it.

“To take a set off Federer at Wimbledon, I don’t think too many Australians have taken a set off him a Slam for a long time as well.

Not even the fastest serve of the year could save Groth as Federer’s surgical hands helped the Swiss to the only four breaks in the entertaining two-hour, 42-minute contest.

Groth rocketed down a 236 kph missile in the third game of the match, the second-fastest serve ever recorded at the All England Club, behind only American Taylor Dent’s – also in a losing cause against Novak Djokovic – in 2010.

“How in the world can you handle that … how can you see it?” four-times champion John McEnroe wondered from his courtside commentary box.

Alas, it was little consolation to Groth as Federer, a seven-times champion and nine-times finalist, advanced to the second week of the championships for the 13th time in an unparalleled career.

“People ask me whether I was trying to break the record and I just say no,” Groth said.

“To be honest, it doesn’t really matter. It’s great that you get your name written somewhere, but I’d trade all of my records to win that match.”

Groth’s exit left Nick Kyrgios as the last Australian standing in the singles after Casey Dellacqua also crashed out on Saturday with a 6-1 6-4 third-round loss to Agnieszka Radwanska.