Nick Kyrgios avenged last year's Wimbledon defeat to Milos Raonic, on Friday beating the Canadian top 10 star to storm into the second week at the All England Club. 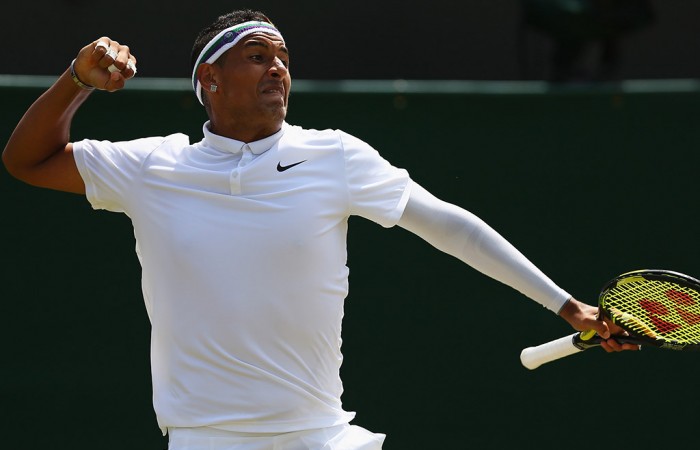 Nick Kyrgios’s fire has trumped Milos Raonic’s ice with the Australian tennis showman turning up the heat to blast his way into the last 16 at Wimbledon.

His sweet revenge after falling to the Canadian in an equally competitive four-set quarterfinal last year earned Kyrgios a return stoush on Monday with Richard Gasquet.

It was against the Frenchman in last year’s second round that Kyrgios announced his arrival as a Grand Slam force when he saved a record nine match points before gunning down Rafael Nadal in round four.

Now Gasquet again stands in his way after Kyrgios produced some magical tennis to surge into the fourth round.

All up, the 26th seed hammered 61 clean winners and made just 13 unforced errors in two hours and 42 minutes.

“I knew my game plan had to be solid on serve and play aggressive,” he said.

“I thought I returned really well today. I created a lot of chances.”

Given their serving firepower, the first set was typically tight with Raonic garnering the only early break point in the fourth game.

Kyrgios held on with consecutive aces, the Australian played the loosest game at 5-6, two double-faults gifting Raonic the set after 44 minutes.

Staying in touch, Kyrgios scorched a forehand winner past Raonic in the fifth game, then celebrated like a cowboy who’d just won a shootout as he spun his racquet like a smoking gun.

But the Canadian continued to stand and deliver, responding with two thunderous aces to hold for 3-2.

“Unbelievable, his second serve’s bigger than my first,” Kyrgios said.

Down break point in the following game, Kyrgios replied with a trio of huge aces himself, including one 200km/h untouchable second serve to hold for 3-3 before celebrating with a mighty roar.

The tension reliever seemed to ease the youngster up as he began to produce his best tennis of the match.

He conjured three break points with some spellbinding play, including a ridiculous running backhand crosscourt flick past Raonic in the ninth game.

Enforcing the All England Club’s all-white dress code, which even cleanskin Roger Federer has dubbed too strict, the Italian official later asked Kyrgios to remove his Wimbledon-coloured headband.

But unlike in his first two matches, when he clashed with umpires, Kyrgios kept his cool and simply turned it inside out.

He finally broke for 6-5 with a semi-framed forehand winner that caught the baseline and, no letting up, Kyrgios tied the match up in the most spectacular of fashion, cracking four successive aces to hold to love.

He sustained the assault in another tight set and recovered from 2-0 down in the tiebreaker to clinch the third set with his 26th ace.

Serving second in the fourth set, Raonic was always under the pump and cracked with a double-fault and then a backhand wide to hand Kyrgios the chance to close out the match at 5-3.

He made no mistake and vowed to continue marching on.

“I don’t fear anyone,” Kyrgios said.

“I definitely feel I’m playing better tennis than last year. Whoever I play I’m going to have the same mindset.”