Stress-free Sam Stosur is tantalisingly close to a second-week appearance at Wimbledon for the first time but knows she must step it up a notch to get there. 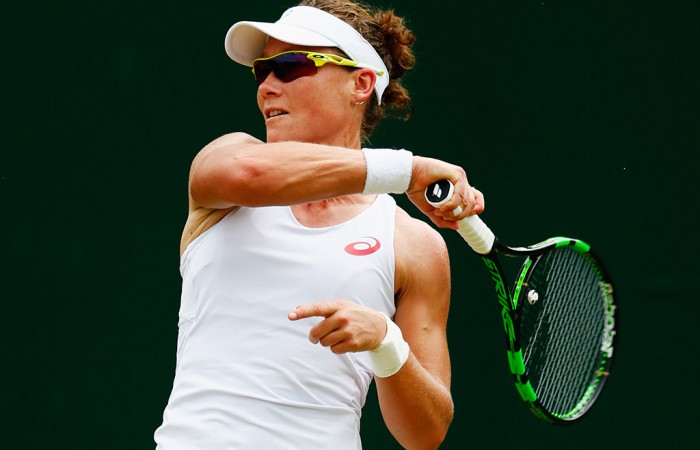 Stress-free Sam Stosur is tantalisingly close to a second-week appearance at Wimbledon for the first time but knows she must step it up a notch to get there.

Yet to drop a set after cruising past Urszula Radwanska 6-3 6-4 in the second round, Stosur faces unseeded Coco Vandeweghe on Friday fully aware of the formidable challenge the big-hitting American presents.

Stosur beat Vandeweghe en route to US Open glory in New York four years ago, but has come up short in their past two encounters, including at the Australian Open in January.

Vandeweghe’s 7-6(5) 6-4 removal of 11th seed Karolina Pliskova on Wednesday provided another reminder of the arsenal the world No.47 possesses.

“It’s going to be a tough one. I’ve lost the last couple of times we’ve played but had some really close matches,” Stosur said after advancing to the third round at the All England for only the third time in 13 visits.

“I know she’s going to be out to play some big tennis. She always does.

“She’s one of those opponents that can be very dangerous, but she can also be a little bit erratic.

“So it’s a matter of being really conscious of taking care of your own service games and doing what you need to be doing and any opportunity on her service games, you’ve got to try and take because you may not get too many.”

Stosur, who has excelled not only on American hard courts but even more consistently on European clay, attributes her miserable Wimbledon record to never really getting full value for her big second-serve kicker on grass.

But the 22nd seed believes the hotter conditions this year are proving to her advantage.

“The weather is making the court play quite hard,” she said.

“You are able to hit with a bit more topspin and a few more kick serves and you get a bit more reaction out of it because it is so hard and dry.

But the biggest factor behind her grasscourt revival, having not won a match on the surface in a year before this week, is Stosur’s more relaxed approach.

The 31-year-old admits to having been too uptight in past trips to London’s hallowed lawns and opted to relieve the pressure on herself this campaign.

“There’s always nerves and jitters at certain points of time, but I don’t think that ever goes away if you care about what you’re doing,” Stosur said.

“But I feel like I’m just going out there and playing. I’m not worried about the what-ifs and what can wrong or anything like that.

“I’m just trying to play the way I want to play out there and enjoy it, and it’s working.”