Lleyton Hewitt and Thanasi Kokkinakis have combined for an epic victory in the Wimbledon men's doubles event, while Aussies will feature prominently in mixed action, beginning Friday. 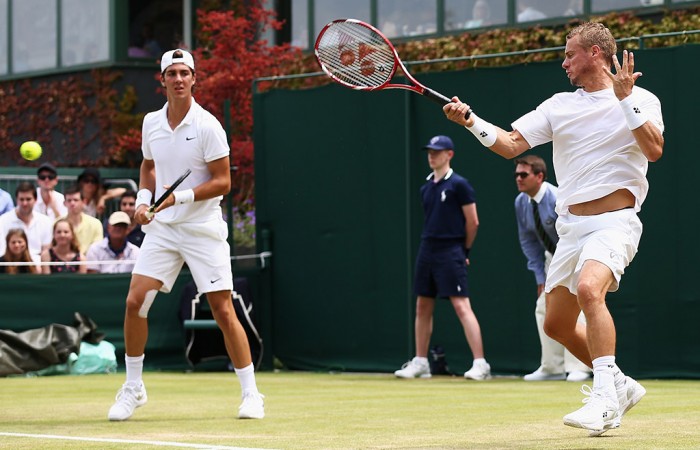 Young gun Thanasi Kokkinakis has helped prolong Lleyton Hewitt’s Wimbledon career by partnering the veteran to a spirited first-round doubles win at the All England Club.

The former world No.1 is contesting his 17th and final Wimbledon, while Kokkinakis made the singles main draw for the first time this year.

Struggling with an intestinal infection, Kokkinakis also bowed out in the opening round of the singles but gained a first-hand lesson in fighting spirit playing alongside one of the game’s most fierce competitors.

Meanwhile, mixed doubles action gets underway on Friday at the All England Club, and Aussies feature prominently in some exciting duos.

Nick Kyrgios will team with American young gun Madison Keys; they will take on …

Hewitt will partner compatriot Casey Dellacqua – both have Grand Slam winning experience on the doubles court, and have been granted a wildcard to compete in the main draw.

Defending champion Nenad Zimonjic, who last year partnered Sam Stosur to the title, will this year link up with another Aussie in Jarmila Gajdosova.