Bernard Tomic is shaping as a Wimbledon sleeper despite landing in a tough section of the men's draw. 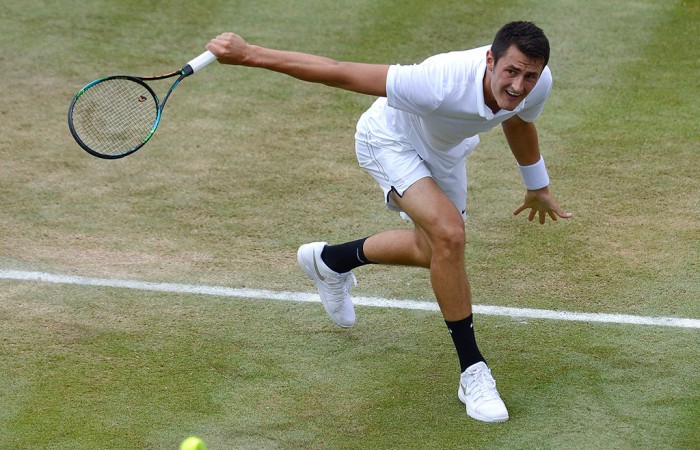 Bernard Tomic is shaping as a dark horse at the All England Club despite landing in a tough section of the Wimbledon men’s draw.

The Queenslander’s eyes are locked on the prize as he prepares to navigate a campaign that could see him face titleholder Novak Djokovic in round three.

Still stinging from his shock French Open final loss, Djokovic first must negotiate a path past tough German Philipp Kohlschreiber, the highest-ranked unseeded player in the draw – and possibly Lleyton Hewitt in round two.

Yet Tomic says it’s much too early to be thinking about that.

“It’s not easy for Novak to start that match off,” Tomic said.

“So you have to respect everyone but for me obviously being a seed now it opens a little bit some doors paper-wise.

“But that can not mean a lot.”

Tomic required cortisone injections to get through the French Open but is feeling freer after persevering with new orthotics.

“In Halle, I played a match with them, which wasn’t the best thing to do but I forced myself to be ready for Wimbledon,” he said.

“To play with these new in-soles is very difficult. I’ve never played with them. So for four or five days I had started playing with them, it was tough. But I’ve gotten used to them now.

“I’m moving a lot better in them and my back pain is easing off, so I think that was the cause. So we’ll see how it goes but it’s definitely a lot better than Paris.

“I’m a lot more confident this year heading into Wimbledon. It’s a tournament I’ve done really well at in the past so it’s a good feeling being back here.”

“Nick, he was serving very good. He’s very confident as well. He’s got a good draw as well to do some damage,” Tomic said.

“And obviously hitting today with Lleyton, he’s an always an amazing hit on grass.

“I’ve been practising very well. So for me, the last two days have been crucial to train well.

“It’s the days you do before Wimbledon that make the big difference.”